Mayor of London Boris Johnson has revealed proposals to designate the Old Kent Road as an 'opportunity area' for the development of at least 2,500 new homes. 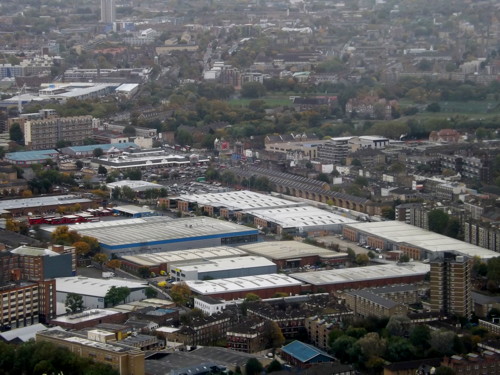 The Old Kent Road corridor seen from the Shard

The proposals are part of a package of changes the Mayor has drawn up to his 2011 London Plan, the document that sets out the future development of the city.

Known as the Further Alterations to the London Plan, the aim is to update the document in line with the Mayor's 2020 Vision for the capital and address the key issues arising from an unprecedented population boom that will see London become the first city in Europe to be home to 10 million people by 2030.

Much of the rest of SE1 – including Bankside, London Bridge, Waterloo and Elephant & Castle – already falls within opportunity areas designated in the current edition of the London Plan.

"London is the greatest place in the world in which to live, work and do business," said Boris Johnson.

"As the capital continues to flourish over the next few years, we will need to create over half a million new jobs and a million more people will have to be housed.

"That's why it is crucial that we plan strategically for the future, to ensure we have a cleaner, greener, safer city that abounds opportunity, talent and economic activity."

The Further Alterations to the London Plan are now open to a 12-week public consultation, to be followed by a public examination later this year, and are likely to be adopted by mid 2015.

The Mayor's proposals for the Old Kent Road corridor describe "significant potential for residential-led development" – a minimum of 2,500 new homes – and an indicative employment capacity of 1,000.

The draft alterations to the London Plan talk about a reduction in industrial activity along Old Kent Road: "The employment and minimum homes figures above should be explored further and refined in a planning framework for the area and through a review of the strategic industrial location and capacity to accommodate a phased rationalisation of its functions in the opportunity area or reprovision elsewhere."

The Mayor's announcement also notes that "One of the proposals for the Bakerloo line extension is via Old Kent Road which would increase the potential of this proposed opportunity area to deliver new homes and jobs."

The Bakerloo line extension is included in a matrix of future transport projects in the London Plan alterations but is marked as unfunded and for completion beyond 2022.

Mr Johnson has also upped the minimum number of new homes proposed for Elephant & Castle from 4,000 to 5,000.

Fiona Colley, cabinet member for regeneration, said: "We welcome the recognition that Southwark is a London leader in its ambitious home-building programme and that the opportunities for development in Southwark stand to benefit London's economy as a whole.

"A great deal more needs to be done to consider the appropriate Balance between residential, business and retail space and ensure that the area remains for mixed use.

"Southwark Council has already committed to building 11,000 council homes in our borough, alongside housing of all types, in order to address the challenges of a growing population.

"The key element of any regeneration or building programme for us is that local people are protected and fully consulted in order that they benefit from any plans – we're already working alongside local residents, businesses and other stakeholders to consider how we could modernise commercial spaces, bring forward mixed use schemes and create more jobs as well as more homes in the area."