New swimming pools at Castle centre put to the test

SE1's new public swimming pools at the Castle centre were tested for the first time this week. 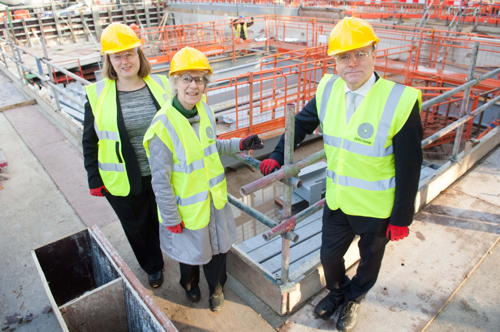 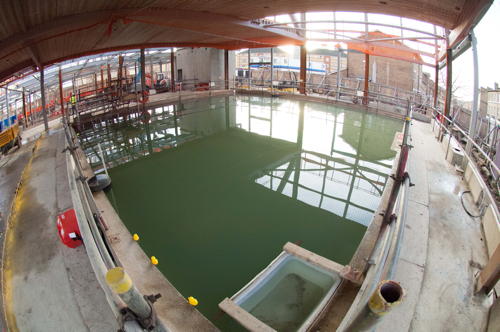 The learner pool at the new leisure centre

"It was exciting to see this wonderful new leisure centre taking shape as you can already start to see the layout, how the pools will look and where facilities like the sports hall, gym and studios will go," said Cllr Peter John.

"We are so pleased to be able to see the progress of such an important new facility for the people of Southwark.

"The council is transforming Elephant & Castle with a huge regeneration programme which will see Ł3 billion of investment for the local community; including 5,000 new homes, a completely rejuvenated town centre, a new shopping centre and this new state-of-the-art leisure centre.

"The regeneration is also bringing thousands of new jobs and training opportunities to the area.

"I can't wait to see the finished building and for local people to start enjoying the new leisure facilities."

The Castle centre is due to open in early 2015.

This week the political controversy about the recent public vote to choose a name for the new leisure centre rumbled on.

At council assembly on Wednesday Cllr John denied that he had consulted Lend Lease, developers of the luxury homes currently under construction on half the site of the old leisure centre, before picking a name.

Simon Hughes MP also added his voice to the controversy: "I am hugely disappointed to find out that after asking members of the public to come up with a name for the new leisure centre in Elephant & Castle – and holding a public poll! – Labour-run Southwark Council has ignored the views of the public and, under the cover of an internal meeting, picked their own name for the centre.

"What should have been a good example of community participation in local decision-making, has instead turned into an ugly example of old-style, centralist, undemocratic Labour politics."

• On Tuesday 11 February there is an opportunity to learn about the results of the archaeological excavation on the leisure centre site at a public lecture organised by the Southwark & Lambeth Archaeological Society.