Eagled-eyed passers-by will have noticed a flash of colour against the grey February skies on Tooley Street this week as Southwark Council shows its support for LGBT History Month. 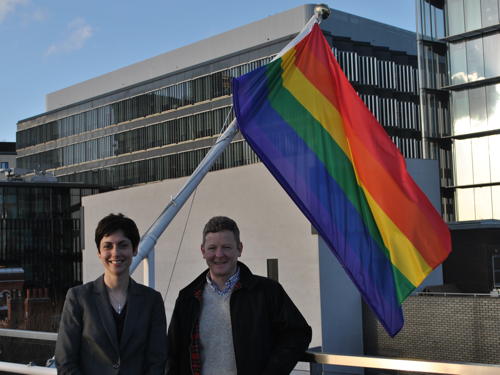 At the start and the end of February the council is flying a rainbow flag to mark the awareness month, which aims to celebrate the lives and achievements of the lesbian, gay, bisexual and transgender communities.

"I am very pleased the council is supporting LGBT History Month and celebrating our LGBT communities and the wonderful contributions of LGBT people throughout history," said Cllr Catherine McDonald, cabinet member responsible for equalities.

"It is particularly timely to fly the flag at the time of the Winter Olympics in Russia."

Peter Vittles, secretary of the Southwark LGBT Network, said: "Events like this are good for the visibility of the LGBT community in Southwark.

"In particular in the context of Russia, where on the day of the opening of the winter games people were being arrested just for waving a flag, it is good of the council to put up the freedom flag for the LGBT communities to feel recognised and valued."

• On Saturday CoolTan Arts is running a guided walk from Camberwell to Cross Bones Graveyard billed as "a sashay through the queer history of Southwark".