The Ukraine crisis figured strongly in this year's commemoration of the allied victory over the Nazis at the Soviet War Memorial in Geraldine Mary Harmsworth Park. 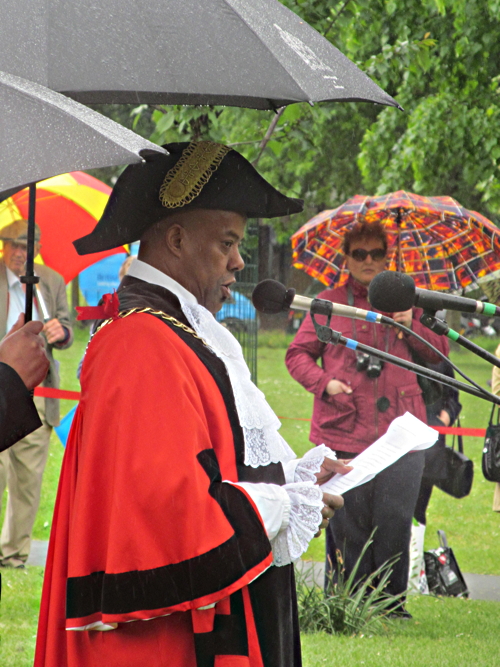 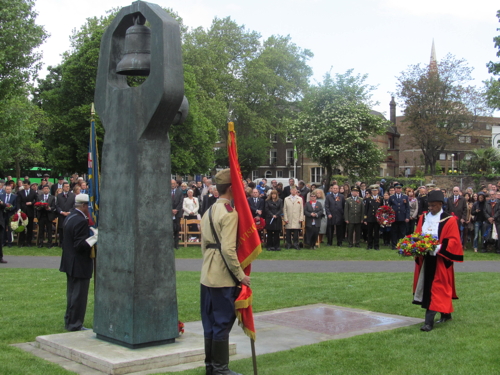 Normally an occasion for warm words about world peace, this year's Victory Day wreath-laying ceremony took on a much more political character with the Ukraine crisis figuring strongly in all the speeches.

The Russian charge d'affaires Alexander Kramarenko told the assembled veterans, diplomats and civic representatives: "I regret to say that, as recent events in and around Ukraine prove, old geopolitics and its zero-sum logic die hard.

"The lack of formal settlement in the Euro-Atlantic area after the end of the Cold War represents a fundamental flaw of the present regional security architecture.

"It is short of being a genuine collective security system that is inclusive, transparent and comprehensive.

"The lack of clarity, ambivalence and ambiguities are fertile ground for old prejudices and suspicions, misunderstandings and mistrust, rooted in ideological confrontation of the past. This generates demand for politics of division.

"If a Europe whole and free is our common goal, than we cannot accept the double standards position that people's interests are paramount in one part of it and interests of the state in another, that human security, responsibility to protect and humanitarian interventions are for some and iron-cast 19th century notions of independence and sovereignty for others, that visa-free regime in the west and Cold War borders in the east of our continent.

"Perhaps we managed the Cold War fine, but the peace has been badly mishandled. We hope that the Ukrainian crisis will serve as a wake-up call for all in Europe and will drive home that message. We owe it to those whose sacrifice we now remember, to ensure that this be the case, that goodwill prevail, at last, in our region."

In his speech, Rt Hon Simon Hughes MP, minister of state for justice, said: "I just want to say on behalf of our friends in Ukraine, to our friends in Russia, that one of the tests of the legacy of the allied victory in Europe is that we give all the countries of Europe the right to decide their future free from external interference from any other country.

"It is imperative, it seems to me, that the people of Ukraine should be allowed freely to elect their new president later this month, should be free to elect the mayors and councils of their countries, and all the people of Ukraine ... should know that it is for Ukraine to decide that future and not for that future to be influenced by military intervention from anywhere outside.

"We need to honour the legacy of the sacrifice which delivered a free Europe by making sure we continue to have a free Europe for all its peoples, able in our own countries to determine our own future. I hope that's something we can all agree upon."

The Ukrainian embassy laid its wreath at the Soviet War Memorial on Thursday rather than joining in the main ceremony on Friday.

As the Mayor of Southwark Cllr Abdul Mohamed reminded guests, this year marks the 15th anniversary of the unveiling of the Soviet War Memorial in Geraldine Mary Harmsworth Park.