Pope Francis has received a cutting from a fig tree at Lambeth Palace given to him by the Archbishop of Canterbury. 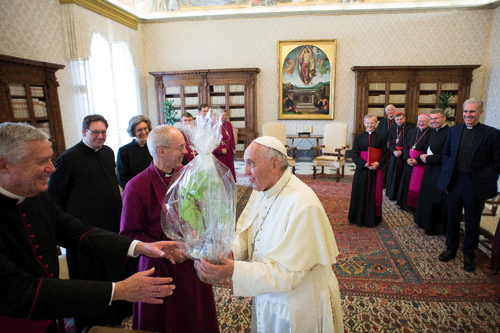 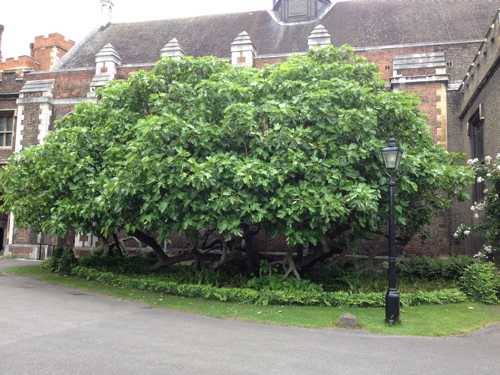 The tree in situ at Lambeth Palace

The cutting was presented in person when Archbishop Justin Welby visited the Pope in Rome earlier this month.

The tree has been growing in front of the Guardroom in Lambeth Palace's main entrance courtyard for just over 450 years. The Ficus carica 'White Marseilles' fig tree was brought to Lambeth by Cardinal Reginald Pole when he was appointed Archbishop in 1556. He was the last Roman Catholic to be Archbishop of Canterbury.

The Cardinal had spent part of Henry VIII's reign in exile and he probably brought the tree as a cutting from southern Italy. He may have liked the fruit which is white fleshed and very rich and sweet. They are ripe when the skins turn a chartreuse colour and start to split. The tree produces a crop in July and September.

The Pope and Archbishop were due to spend part of their time together discussing Christian unity so the new cutting was intended to represent a common heritage.

Having been brought to Lambeth by Pole it was thought fitting by his successor to suggest that the one tree will bear fruit in both Lambeth and Rome as a visible sign of church relationship growing and bearing fruit from the same source.

"As we remember the precious spiritual heritage that is common to us both. I pray for the continuing work of the members of the official groups who conduct our ecumenical conversation," Archbishop Welby said in his formal address at the Vatican.

"Remembering always the desire of Our Lord that 'all may be one', we remain deeply committed to this work. I realise that that there are matters of deep significance that separate us. Yet looking back, we see that the Grace of God has led so much to happen."

Speaking of what Anglicans and Roman Catholics can share, he told Pope Francis that the recent establishment of the ecumenical Chemin Neuf Community at Lambeth Palace was to him a daily sign of hope in what could be shared spiritually.

Pope Francis said: "We cannot claim that our division is anything less than a scandal and an obstacle to our proclaiming the Gospel of salvation to the world."

His Holiness added: "We are indebted to great saints, teachers and communities; they have handed down the faith over the ages and they bear witness to our common roots."

• The North Lambeth Parish Fete takes place in the gardens of Lambeth Palace on Saturday 28 June.