One of the first soldiers to be awarded the Victoria Cross during the First World War has been honoured with a commemorative paving stone close to his birthplace in Bermondsey. 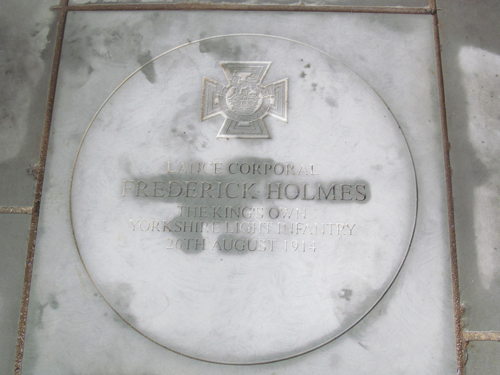 The commemorative stone is at the very western end of Abbey Street, outside the Bermondsey Square Hotel 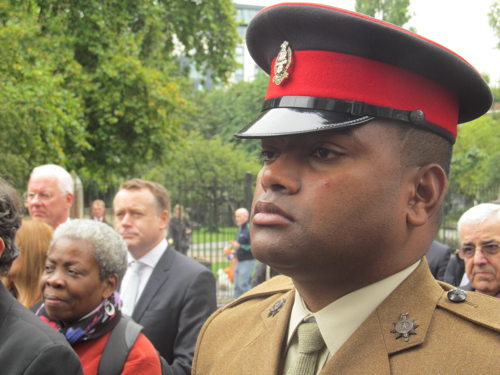 Johnson Beharry VC was among those at Tuesday's ceremony 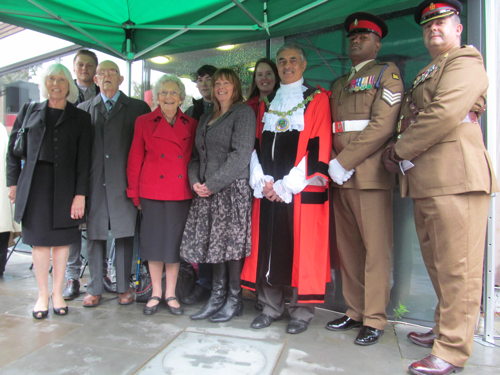 Frederick Holmes was awarded the Victoria Cross for his bravery during the battle of Le Cateau on 26 August 1914.

A century later the Mayor of Southwark has unveiled a commemorative paving stone in the street where he was born.

Holmes was born at 23 Abbey Street in September 1891 and baptised at the nearby St Mary Magdalen church. He served in the Army for seven years from 1907. Two weeks after ending his service in summer 1914, he was called up again to fight in the First World War.

On 26 August 1914 he dodged German shells to resue an injured soldier and then prevented a British gun from falling into enemy hands.

In January 1915, after receiving his VC medal from the King, he was given a hero's welcome in the streets of Bermondsey with a procession from New Kent Road to Tower Bridge Road, Abbey Street, Jamaica Road, Southwark Park Road, Grange Road and Spa Road.

At Bermondsey Town Hall he was given a purse of gold on behalf of the citizens of Bermondsey.

The Mayor of Southwark Cllr Sunil Chopra said: "Marking the centenary of the First World War is an important milestone for the whole nation and Southwark will be showing its support in many ways, including by remembering local war heroes in any way we can.

"Captain Holmes' story of courage and bravery should never be forgotten and I hope this paving stone and honoring him today, will act as a moment of reflection of his sacrifices for all who pass it."

Tuesday's ceremony was attended by representatives of the Army including Colonel Hugh Bodington, chief of staff of London District.

Lance Corporal Johnson Beharry, who was awarded the VC for bravery in Iraq and received the honorary freedom of Southwark in 2011, was also present.

Amy Enever, Holmes's great great granddaughter, said: "It's a family story that we've all grown up with. My grandma has always told us about it.

"It's completely overwhelming and to meet the gentlemen who has also received the Victoria Cross [Johnson Beharry] just makes it so real."

Her mother Tracey Enever said: "It's such an honour to be associated with him ... and to see everyone else recognising what he did."

She said that the family had always been aware of Holmes's humble roots in Bermondsey.

"When he came back from the war he and his wife had six children in quite quick succession. They were very very poor and he couldn't find work and they were facing going into the workhouse.

Simon Hughes, MP for Bermondsey and Old Southwark, said: "The good thing about today's ceremony is that the name of Frederick Holmes VC is now literally imprinted on the street where he lived.

"Bermondsey is proud of its military traditions and the bravery of the members of the armed services who have come from here.

"Each of Bermondsey's VC winners have a story to make us humble but also to inspire. The legacy of World War I will be all the better if more people try to follow the example of courage and self-sacrifice which people like Frederick Holmes showed."