Southwark's Labour administration says that it would be unable to build any new council homes north of the Old Kent Road if Conservative plans to force councils to sell high-value properties are introduced. 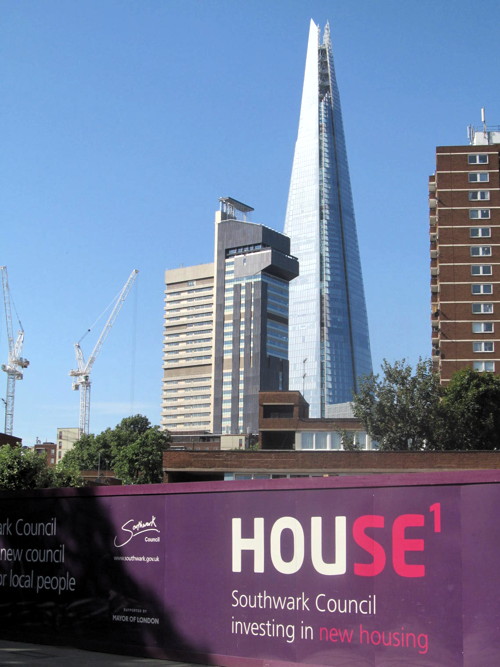 Earlier this week the Conservative Party unveiled plans to extend the 'right to buy' to include housing association tenants. This would be funded by forcing councils to sell high-value council homes when they become vacant.

"Councils are already struggling to meet growing demand for housing and this disastrous policy would make it even harder," said Cllr Richard Livingstone, Southwark Labour's cabinet member for housing.

"In Southwark this proposal would completely torpedo our plans to built 11,000 new council homes.

"We would be forced to sell new council properties as soon as they are built, instead of letting them to local residents in housing need.

"The policy would in effect, at the very least, stop the council from building any new homes north of the Old Kent Road."

Neil Coyle, Labour's parliamentary candidate for Bermondsey and Old Southwark, said: "This is a half baked, unworkable idea from the Tories which will mean fewer homes for local people.

"Under this Coalition Government the number of affordable homes built is at is lowest for 20 years and home ownership is at its lowest point for three decades.

"Labour's manifesto set out a better plan for all local first time buyers to get priority access to homes built.

"Labour will tackle the housing crisis getting at least 200,000 homes built a year by 2020 and introducing a £5 billion Future Homes Fund to support the building of homes for first time buyers and make homeownership a realistic aspiration for working people."

Earlier this week Liberal Democrat candidate Simon Hughes warned that the Tory proposals for council house sales "would have a disastrous effect" in Southwark.

However, he said that his party wouldn't back such a proposal if it held the Balance of power after the general election.

"If the parliamentary arithmetic meant that there was any chance of [Lib Dem MPs] being asked to vote for that sort of policy, we wouldn't vote for it," said Mr Hughes.

"The Tories can put their manifesto on the ground, but nobody thinks that there's going to be any party with a majority, so no party is going to be able to implement everything."

Conservative candidate JP Floru told us: "A large number of Southwark residents will finally be able to realise their dream and own their own home.

"Under the Conservative proposals the proceeds would be used for new additional house building, so there would be no net loss of properties.

"This is a great day for aspirational Britain."