A development which includes some of the most expensive homes in SE1 has been shortlisted for the prestigious Stirling Prize for architecture. 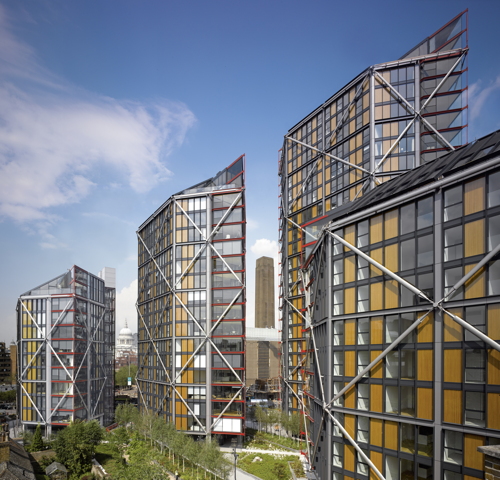 The Stirling Prize for Britain's best new building will be awarded by the Royal Institute of British Architects (RIBA) on Thursday 15 October.

Seven of the ten most most expensive SE1 residential property transactions recorded at the Land Registry in the last five years relate to homes at Neo Bankside.

One of the penthouses was put up for sale for Ł22 million last year but it remains on the market with a current asking price of Ł19.75 million.

In their citation the RIBA judges describe Neo Bankside as "seductive architecture" adding that "the scheme contributes to a debate about urban design and building form and is a well-mannered example of a structurally expressive architecture".

They add: "This is high-quality housing you would be unlikely to see elsewhere in the world in the inner city – and it is ungated."

Controversially, the scheme has no on-site affordable housing. Instead, social housing was built by Native Land and Grosvenor on sites in Tower Bridge Road, Alice Street and elsewhere in North Southwark.

Plans to include shared ownership homes within Neo Bankside were shelved when local property prices skyrocketed. Instead the developers paid Southwark Council an extra Ł9 million, some of which has been allocated to new council homes now under construction in Long Lane.

The ground-floor retail space at Neo Bankside has remained mostly empty until now. This month a branch of Carluccio's will join Albion Bankside, and Gail's Bakery and The Co-operative Food are due to open soon.

On the Stirling Prize shortlist Neo Bankside is up against Burntwood School, a Peabody affordable housing development in East London, the Maggie's cancer care centre in Lanarkshire, a new library and teaching building at the University of Greenwich and the extension and refurbishment of The Whitworth art gallery in Manchester.