A high court judge has dismissed a bid by five residents of the Neo Bankside development to have part of the viewing gallery at Tate Modern's Blavatnik Building closed off to prevent tourists looking into their homes. 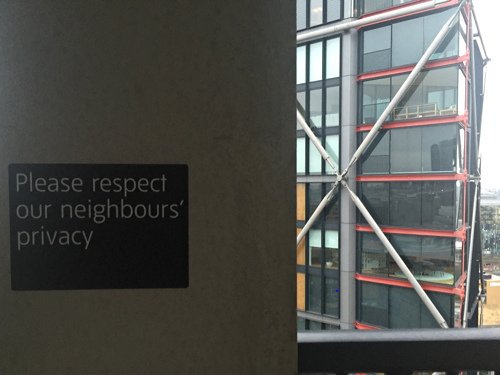 "The proper meaning of the notice will be lost on non-English speakers, and its real significance lost to most others."

Giles Fearn, Gerald Craftman, Ian McFadyen, Helen McFadyen and Lindsay Urquhart – all of whom own flats in block C of Neo Bankside – sought an injunction requiring Tate Modern to screen off the southern and part of the western sides of the open-air viewing gallery on the 10th floor of the Blavatnik Building.

The claimants argued that Tate is a public authority and therefore the impact of the gallery on its neighbours could be regarded as a breach of the Human Rights Act. They also relied on the law of nuisance.

The case was heard at the High Court last November and Mr Justice Mann's judgment has now been handed down.

In her evidence, Claire Fearn said she felt "sick to her stomach" when the viewing gallery opened and people waved, made obscene gestures and photographed and filmed her family in their apartment.

Another claimant, Lindsay Urquhart, said that when she visited Tate Modern she overheard one visitor say that the "rich bastards" who lived in the flats deserved the intrusion that the gallery afforded.

Tate's witnesses – including Tate Modern director Frances Morris – resisted the notion that views southwards should be restricted – Ms Morris said that to close the southern section would be to "turn their backs" on south London.

Having visited both the viewing gallery and the Neo Bankside flats, Mr Justice Mann found that "it is not unreasonable to feel as the claimants do about the presence of the visitors" and "it is not unduly sensitive for the occupants to feel as they do" about the implications for their privacy.

The judge had this to say about the notices put up by Tate asking visitors to respect their privacy: "I have to say that I do not regard them as likely to achieve much. The proper meaning of the notice will be lost on non-English speakers, and its real significance lost to most others."

The judgment also reveals that Tate had instructed its security guards to stop people photographing the Neo Bankside flats.

Mr Justice Mann also found that "on the balance of probabilities it is not likely" that Southwark Council's planning department considered the extent of overlooking from the proposed viewing gallery to the proposed flats at Neo Bankside.

The judge found that for these purposes Tate is not a public authority.

On the nuisance claim, he found that "the law of nuisance is capable, in an appropriate case, of operating to as to protect the privacy of a home as against another landowner" but concluded that there was no actionable nuisance in this instance.

"An occupier in [this] environment can expect rather less privacy than perhaps a rural occupier might," said Mr Justice Mann who described Bankside as "a part of urban south London used for a mixture of residential, cultural, tourist and commercial purposes".

He added: "Anyone who lives in an inner city can expect to live quite cheek by jowl with neighbours. That is implicitly acknowledged by the claimants when they say they do not object to the fact that they are overlooked from the windows of the Blavatnik Building."

The judge took the view that the flats' glass-walled design is a major factor in the problems experienced by the residents, and a more conventional arrangement of walls and windows would be unlikely to give rise to the same issues:

"It would be wrong to allow this self-induced incentive to gaze, and to infringe privacy, and self-induced exposure to the outside world, to create a liability in nuisance."

He continued: "These properties are impressive, and no doubt there are great advantages to be enjoyed in such extensive glassed views, but that in effect comes at a price in terms of privacy."

Last year Tate Modern reduced the hours of public access to the viewing gallery, and Mr Justice Mann finds that "it would be appropriate for that restriction to be enshrined in an undertaking to the court".

The claimants' law firm says they are considering an appeal.

Former Tate director Nicholas Serota caused a stir when in 2016 he told Neo Bankside residents that they "might put up a blind or a net curtain or whatever" to enhance their privacy.