Fears for the safety of a man in a Father Christmas costume last seen on a bridge in central London sparked a search mission for the RNLI's Tower lifeboat crew. 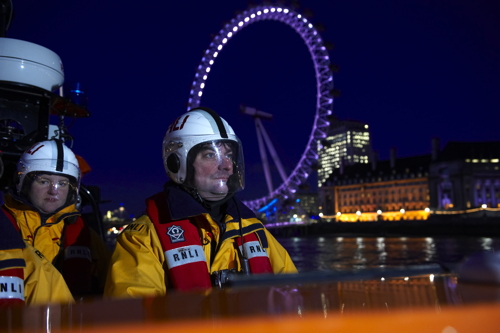 The charity's lifeboat was launched at 6.18am on Sunday following a report to the Coastguard of a lost Santa last seen by friends on one of the Golden Jubilee Bridges between the South Bank and Charing Cross.

"It seems a man dressed as Santa had been on a stag night on Saturday evening and into the early hours of Sunday and lost his friends," said Stan Todd, RNLI lifeboat helmsman.

"We think he ended up drinking a few too many mulled wines and got separated from them on the way home.

"His mates tried without success to get hold of the man on his phone. Fearing for his safety they called 999 and as been as Hungerford Bridge was the last place he had been seen, the Coastguard requested the lifeboat to launch.

"When we arrived at the bridge we saw a man dressed as Santa walking off it alongside a policeman."

The run up to Christmas is traditionally one of the busiest times of the year for the Royal National Lifeboat Institution's (RNLI) London crews based at Teddington, Chiswick and Tower (next to Waterloo Bridge) lifeboat stations.

The RNLI's Adam Robson said: "Of course people are out drinking and enjoying themselves in London during the run up to Christmas, but whether you are on the river, or simply walking alongside it, please take extra care.

"Slips, trips or falls can happen all too easily, especially if you've been drinking. Plunging into the bitingly cold river water can cripple even the most accomplished of swimmers causing uncontrollable gasping, drawing water into the lungs and making it almost impossible to swim or even stay afloat.

"Please don't let a drunken trip or fall turn a fun night out with friends into a life or death situation. Please respect the water and take extra care around the River Thames. If you see someone in trouble, call 999 and ask for the Coastguard."