Bishops of London and Woolwich meet on London Bridge

The Bishop of Woolwich and Bishop of London met on London Bridge for the annual Blessing of the River Thames. 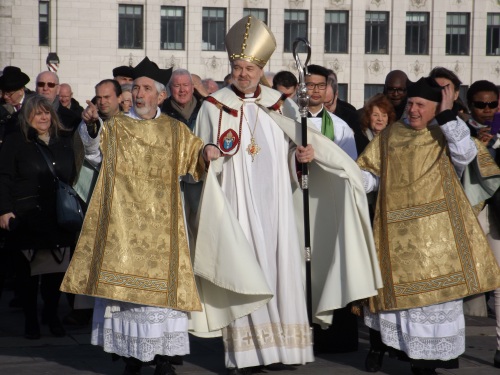 The Bishop of London arrives on London Bridge 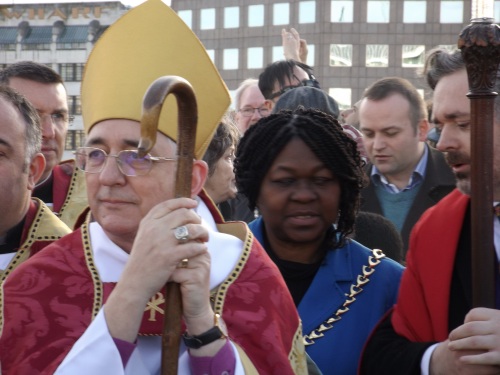 The Bishop of Woolwich with the Mayor of Southwark, Neil Coyle MP and Southwark churchwarden Matthew Hall 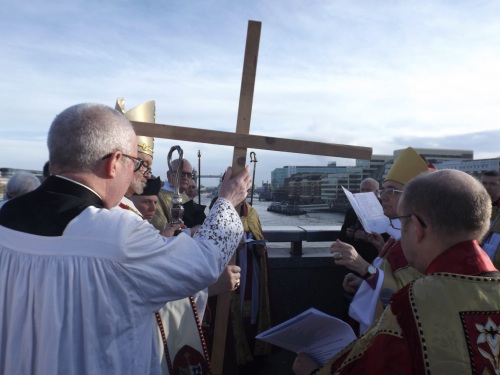 The Cross about to be hurled into the water 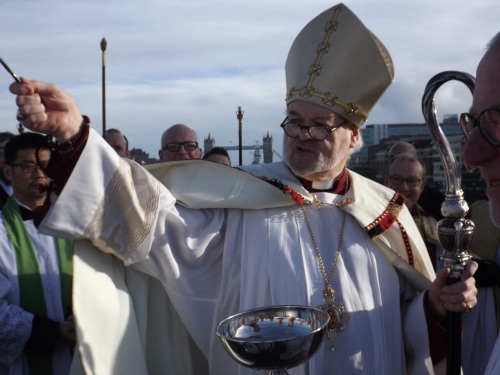 The Bishop of London blessing the crowd with holy water

The Bishop of Woolwich, the Rt Revd Michael Ipgrave, and Bishop of London, the Rt Revd Richard Chartres, met on London Bridge for the annual Blessing of the River Thames.

The custom, which takes place on Baptism of Our Lord Sunday, follows the Orthodox custom of hurling a cross into water as a symbol of Christ's baptism.

The Bishop of Woolwich was joined by members of Southwark Cathedral congregation.

The Bishop of London arrived in procession with the congregation of St Magnus the Martyr in the City of London where he had celebrated the Sunday Mass.

St Magnus Church was described as being 'at the foot of London Bridge' as early as 1067 and its present tower was designed to allow the Old London Bridge pavement to run through its base.

Also present at Sunday's ceremony on the bridge's east side was the Mayor of Southwark Dora Dixon-Fyle and Bermondsey and Old Southwark MP Neil Coyle.

The Dean of Southwark, the Very Revd Andrew Nunn, read Psalm 46 with the crowd from the City and Southwark responding "The river makes glad the city of God."

Fr Philip Warner from St Magnus read The Song of Ephrem the Syrian and lead prayers for those without water and those who had downed. Also included in prayers were the Port of London Authority, the River Police and Sea Cadets.

The gospel was read by cathedral succentor Stephen Sravrou who is shortly moving upstream to be vicar of the Thames riverside parish of St Michael's at Barnes.

Afterwards the crowd was sprinkled with holy water, first on the Southwark side of the boundary by Bishop Michael and afterwards by Bishop Richard standing within the Square Mile.