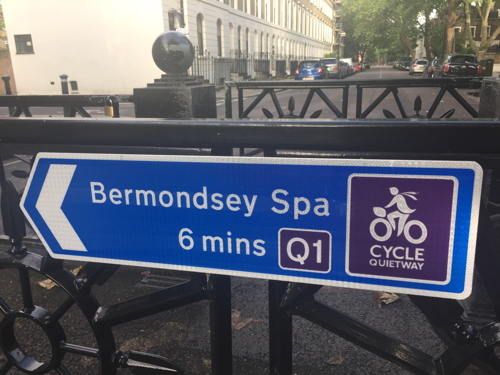 Quietways were introduced as part of the programme of cycling projects initiated by Boris Johnson while he was Mayor of London.

Unlike Cycle Superhighways which are mostly on Transport for London-controlled roads, Quietways rely on the cooperation of borough councils.

Quietway 1 is at least a year behind schedule and Boris Johnson's former cycling commissioner Andrew Gilligan has been vocal in stating his frustration about the difficulty of brokering these cross-borough routes.

The SE1 section of Quietway 1 runs from the South Bank via Cornwall Road and Webber Street to Great Suffolk Street and Trinity Street, before turning into Globe Street, Pilgrimage Street and Tabard Street.

The most controversial point on the SE1 section of the route is the barrier in Trinity Street which is designed to deter mopeds and motorbikes. The council is currently carrying out a formal consultation on a traffic order to allow automatic numberplate recognition cameras to be used to enforce the ban on motor vehicles when the gap is widened for the benefit of cyclists.

"It is important that we make it safer and easier for Londoners to cycle across our city and we want the first of the Quietways to make a significant contribution towards that aim," said Mayor of London Sadiq Khan.

"I am already looking at what works best from the existing cycle schemes to ensure we deliver the best and safest road cycling network possible. Cycling leads to a healthier lifestyle, it helps to cut pollution and is a key part of my vision of the type of greener, more modern and affordable transport network we need in our city."

Ben Plowden, TfL's Director of Surface Strategy and Planning, said: "We're really pleased to see the first Quietway, from Greenwich to Waterloo, open and ready for cyclists and pedestrians to use. The Quietway programme along quieter backstreets will help open up a whole new area of London for people walking and cycling and support non-polluting and healthy travel for commuting or leisure."

Matt Winfield, deputy director of Sustrans, said: "Quietway 1 provides a direct, quick and safe link from Greenwich into Waterloo, and points between. It is another important step in improving the quality of life and economic resilience in our world leading city. We are particularly pleased with the scheme designed and delivered at Millwall Football Club, providing a more direct and car free route for both cyclists and walkers, and a crucial link in this highly useful route."

Six more Quietways – including routes from Waterloo to Croydon and Elephant & Castle to Crystal Palace – are due to open by next May.

Southwark's cabinet member for environment and public realm Ian Wingfield has recently signed off plans for a new 'Jubilee Quietway' between Blackfriars Road and Tower Bridge Road, including controversial changes to one-way systems around Bermondsey Street and Leathermarket Street.