On Cycle Superhighway 6 across Blackfriars Bridge, cyclist numbers have increased by 55 per cent, according to Transport for London. 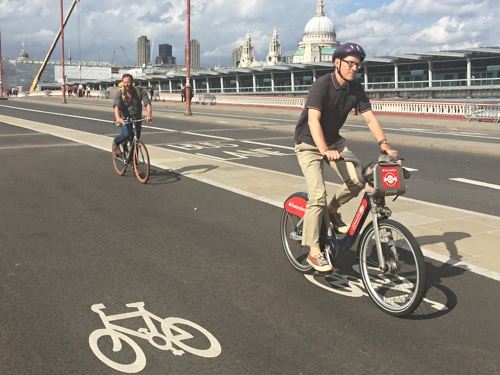 The segregated cycle lane on Blackfriars Bridge has been open since late April this year.

The stats were released by Transport for London as Mayor of London Sadiq Khan confirmed that the next phase of the cycle superhighway between Farringdon Street and King's Cross will go ahead.

Alan Bristow, TfL's director of road space management, said: "The first section of the North-South Cycle Superhighway has been a great success, with cyclists making up 70 per cent of traffic going over Blackfriars Bridge in the busiest times.

"We're keen to move forward with the next section to King's Cross, linking in with other cycling routes in central London, and will continue to work with the boroughs, community groups and other stakeholders to address the issues raised during the consultation ahead of setting out our next steps."

The new Mayor has promised to learn the lessons from the earlier work on the cycle superhighways in order to reduce disruption during construction.