At least 35 per cent of new homes on Transport for London-owned land in Southwark Street will be 'affordable', Mayor of London Sadiq Khan has said. 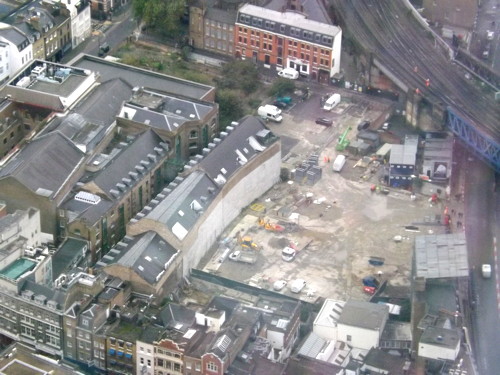 Transport for London this week launched the search for a developer for the land it owns – sometimes dubbed Landmark Court – at the junction of Southwark Street and Redcross Way, adjacent to Cross Bones Graveyard.

Mayor of London Sadiq Khan visited the site soon after taking office in May.

The site was used by London Underground during the construction of the Jubilee line extension and by Network Rail as part of the Thameslink Programme works at Borough Market.

More recently it has been used as a car park and a venue for film location units.

Sadiq Khan said: "It is unacceptable for sites to sit unused when our city is crying out for more housing."

City Hall says Landmark Court "has the potential to unlock more than 25,000 sqm of development".

The site has potential for mixed use development, including commercial and retail space, and potentially more than 100 homes, of which at least 35 per cent will be affordable.

TfL hopes to have selected a development partner for the site in early 2017.

Sadiq Khan said: "A chronic lack of affordable housing in our city has undeniably led to Londoners being priced out, with rents they can't afford and little hope of getting on the property ladder.

"We won't be able to fix this problem overnight, but I am determined to lead the way by building more new and genuinely affordable homes to rent and buy.

"That is why it is crucial we get on and start building affordable homes on the hundreds of sites owned by Transport for London that we know have been sat undeveloped for far too long."

Graeme Craig, TfL commercial development director said: "Today's announcement illustrates how we are working closely with the Mayor across all of our sites to deliver the types of development London needs.

Crossbones Garden, developed by Bankside Open Spaces Trust and the Friends of Crossbones, will remain when the adjacent site is developed.