St John's Waterloo has launched a fundraising campaign to renovate the building as a "beacon on the South Bank" in time for the 70th anniversary of the Festival of Britain in 2021. 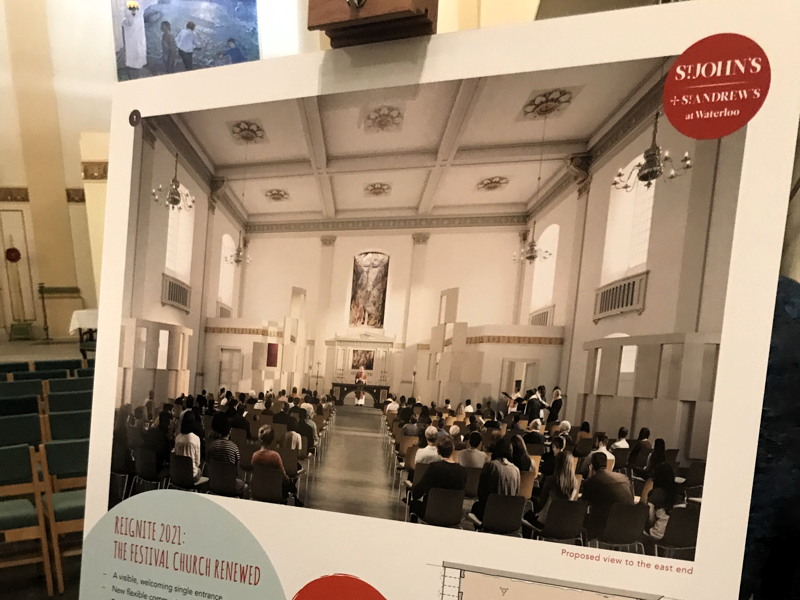 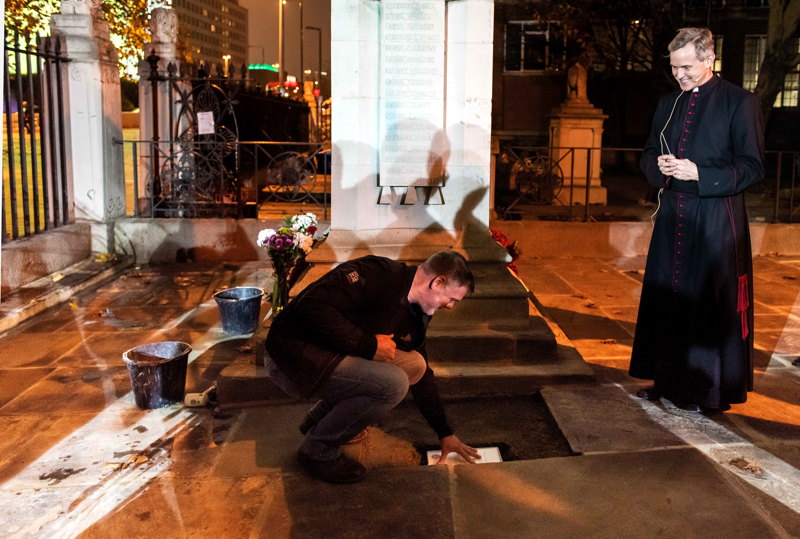 On Thursday night a time capsule containing objects "capturing the essence of 2018, for future generations to uncover" was placed in the ground at the foot of the war memorial outside St John's. Photo: Eleanor Bentall

A time capsule was buried in the church forecourt on Thursday night to mark the launch of the 'Reignite 2021' campaign to upgrade the building to serve as a South Bank equivalent of St Martin-in-the-Fields combining Christian worship with the arts and social action.

St John's Waterloo was built in 1824 to designs by Francis Bedford but its current interior is post-war, dating from Thomas Ford's restoration of the church as one of the venues for the Festival of Britain held on the South Bank in 1951.

St John's and the Royal Festival Hall are the only two surviving Festival of Britain buildings on the South Bank.

The latest plans – drawn up by Eric Parry Architects – will see the church remodelled with the area below the gallery separated from the body of the church with glazing, improved access to the crypt, a relocated font and new toilets.

Behind the altar, the murals depicting the parable of the Good Samaritan on Waterloo Bridge are to be removed from view, drawing the eye instead to the central mural by Hans Feibusch.

"St John's has helped so many over the centuries," said Canon Giles Goddard, the vicar.

"It was an air-raid shelter during the war, a haven for the homeless in the 1980s, and today offers music concerts, art exhibitions and employment courses.

"Now the church needs a helping hand itself. With our Reignite 2021 campaign, we aim to raise a further Ł1 million to ensure the St John's can be renovated in time for the seventieth anniversary of the Festival of Britain."

Two years ago previous – more radical – proposals by Parry provoked objections from Historic England and the Twentieth Century Society who were concerned about the loss of parts of the Festival of Britain scheme.

After a four-day Consistory Court hearing at the end of 2016, the chancellor of the Diocese of Southwark declined to grant the ecclesiastical equivalent of planning permission, finding that the alterations then proposed would cause "serious" harm, with the integrity of the 1951 interior "severely compromised".

The new plans are not expected to attract formal objections from either body.

St John's has already raised around Ł2 million from funders including the Big Lottery Fund and the City Bridge Trust.

• Find out more about Reignite 2021 at www.stjohnswaterloo.org/reignite2021