I’ve ‘nothing but pride’ for Garden Bridge says trust chair

The chairman of the Garden Bridge Trust - whose failed scheme to build a bridge across the Thames cost taxpayers £43 million - says he looks back on the project with "nothing but pride". 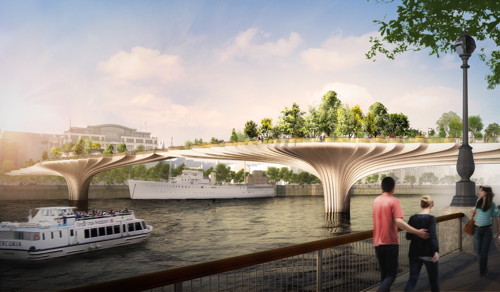 Lord Davies of Abersoch – who was empty-chaired at City Hall when he declined to appear before the London Assembly – has broken his silence in an interview with Management Today magazine.

"I look back on it with nothing but pride," Lord Davies told Management Today's Matthew Gwyther.

"We were victims of a change of London mayor, prime minister and chancellor. We raised all the private money we were supposed to."

By the time the project collapsed in the summer of 2017 the trust had raised Ł70 million of private money whilst the final cost of the bridge was likely to top Ł220 million.

The final cost to the public purse of the failed project was assessed as Ł43 million.

The peer also warned that the debacle will affect future projects: "In the future it will be very difficult to persuade trustees to get involved with these sorts of things. Private-public partnerships like this need certainty from the beginning."

Lord Davies also noted a British tendency to dither over infrastructure projects: "We're a wonderful, magical nation but we do faff about," he said. "Look at the negativity before the Olympics and what a success that proved."

The Garden Bridge Trust is currently in liquidation.

Last November, in the run-up to the general election, Boris Johnson insisted on LBC that the Garden Bridge "was a viable project" and blamed Sadiq Khan for "deciding, wrongly in my view, to cancel it".