The South Bank's new centre for all things relating to the moving image opened this week. BFI Southbank is the new name for the National Film Theatre. 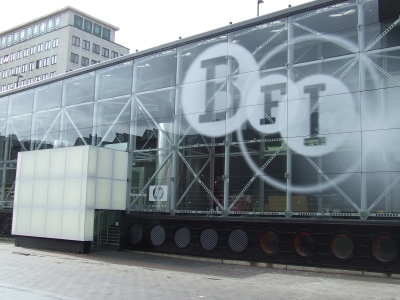 The new entrance on Theatre Avenue 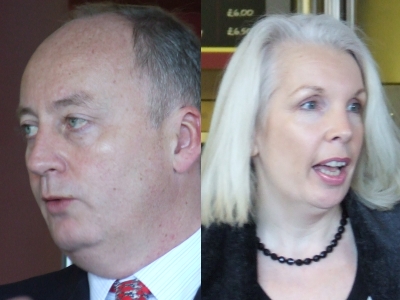 After 14 months of building work and Ł6 million investment the British Film Institute has unveiled BFI Southbank, described as a "stepping stone" to the long-term plan for a permanent national film centre.

Since the closure of the Museum of the Moving Image (MOMI) in 1999 much of the space under the southern approach to Waterloo Bridge has been unused. Now a new entrance to the NFT's three cinemas has been created on Theatre Avenue, the walkway between the National Theatre and Waterloo Bridge.

"The BFI has known for many, many years that the National Film Theatre which we all loved would come to the end of its natural life," explains BFI director Amanda Nevill.

She explained that the BFI realised that the state of the fabric was "critical": "The building itself was so worn out that we knew that beyond 2012 it was unlikely that it would function without a very, very significant piece of investment."

Ahead of a decision on a permanent film centre, Nevill explained that the BFI considered what the public would expect from a modern national home for moving image: "We decided that what we would do it to create a really good rehearsal room or taster to ignite the imagination of the public."

"The critical thing is that it becomes a day-long visit ... for me, success will be when I see 16-year-old boys and girls from Lambeth choosing to come here on a wet Saturday afternoon."

"If you want an idea of how far you can make Ł6 million stretch, come and have a look here. It's really stunning," he said.

The rejuvenated and expanded venue includes a Mediatheque where – for the first time and for free, visitors can sit and watch hundreds of hours of film and television from the BFI National Archive. The space has 14 bookable viewing stations.

The gallery space will showcase leading UK and international artists' work with moving image and new media. The gallery launches with a debut exhibition by the New-York pioneers of media art, Jennifer & Kevin McCoy, entitled Tiny, Funny, Big and Sad.

The new foyer is dominate by the digitally-equipped Studio cinema, which in time is expected to show a rolling programme of films on a drop-in basis. It will also be the setting for talks and other public events.

The Benugo Bar and Kitchen in the foyer has comfy sofas overlooking Theatre Avenue.

In recent years the NFT has lacked a bookshop. The new BFI Filmstore is staffed by experts and stocks more than 1,200 book titles and 1,000 DVDs for people to browse and choose from. All material on the reading lists for film courses at London universities will be carried and staff will be happy to advise on and order books if required.