Liberal Democrat Anood Al-Samerai has won the Riverside ward by-election in the borough of Southwark by a clear margin. 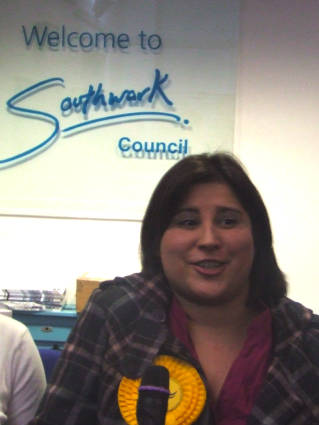 The result will come as a blow to Labour activists who had hoped to make a breakthrough here and embarrass council leader Nick Stanton in his own ward.

The by-election was prompted by the resignation of Lib Dem councillor Paul Baichoo who gave up his seat on health grounds, having failed to attend any council meetings for nearly six months.

Although there was a modest increase in the Labour vote, sharp falls in support for the Conservatives and Green Party gave the Liberal Democrats a strong lead.

Southwark's newest councillor is 26-year-old Anood Al-Samerai. A Southwark resident for 17 years, she has spent the last four years working for North Southwark and Bermondsey MP Simon Hughes dealing with problems on behalf of constituents.

"It was a fantastic result and it's a fantastic endorsement of what the Lib Dems are doing in Southwark. To Simon [Hughes] and the Riverside team of Nick [Stanton] and Eliza [Mann] – thank you very much.

"It's been a great campaign – I've actually enjoyed it, despite the cold. The people of Riverside are wonderful and I'm so grateful to them for giving me this opportunity. I'm going to work ever so hard – I won't let them down. I'm really privileged to represent them."

"Obviously really disappointed ... I'm really pleased with the campaign we ran and how we connected with people across the ward. This is a base for continuing to work with people in the ward to make the area a better place.

"What's happened tonight is that the Tory and Green vote has collapsed. The Liberals really had to squeeze all of those votes to cling on. They've obviously made some promises. I'll be around to make sure they keep to them."

"First of all, congratulations to Anood. The Lib Dems have fought an interesting campaign here. I think it's been amusing watching Lib Dem and Labour fight each other ... We fought very hard. Considering we've done this through volunteers, it's nice to see that the Tory presence here has grown and people have taken us seriously as a party for change in Southwark.

"The message that we have had on the doorstep has been very positive and people have liked what they heard. I certainly will be fighting for Riverside tomorrow morning and moving forward, and I look forward to getting stuck in and helping on local issues."

"Obviously I wish that we'd have won! The other parties have got a lot more resources. I think we did really well. Because it's a by-election the fact we still managed to get 122 votes is pretty good."

"It ended up being a two-party contest ... the Tory and Green votes were clearly squeezed. Anood was an excellent candidate. I've known her well. She's been a fantastic colleague on my team. She'll make a really, really dynamic councillor and I think the people of Riverside will be extremely well-served by her in the years ahead."

"Yes, it's disappointing that we didn't make more of an impact ... with Labour doing as badly as it is in national opinion polls for our vote to hold up and in fact to increase by six per cent is a good result for Labour."

More on the Riverside by-election