Ken Livingstone has been presented with a Good Egg Award by Hugh Fearnley-Whittingstall for using free-range eggs and chickens in catering at City Hall. 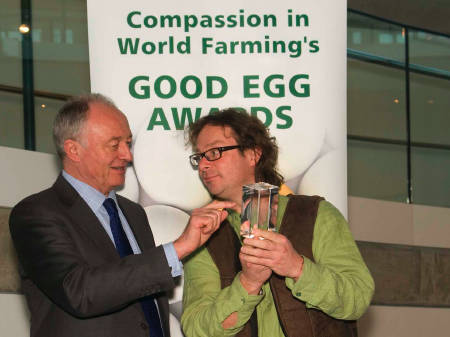 Ken Livingstone and Hugh Fearnley-Whittingstall at City Hall on Friday

The award was presented by Hugh Fearnley-Whittingstall on behalf of Compassion in World Farming at City Hall on Friday.

The Mayor of London has also urged the functional bodies of the Greater London Authority, such as Transport for London and the Blackfriars Road-based London Development Agency, to follow City Hall's lead in insisting that catering contractors use free-range eggs and chicken.

"When it comes to animal welfare, poultry is in the front line," says Hugh Fearnley-Whittingstall.

"It's time to stop intensive factory farming of broiler chickens and laying hens, and I'm delighted that London will be leading the way. I'm pleased to present this Good Egg Award on behalf of Compassion in World Farming. Well done City Hall and Ken Livingstone."

City Hall itself is sometimes described as a giant glass egg.

The Mayor of London joins the likes of Sainsbury's, M&S, Starbucks , Google, Sky, and Microsoft as winners of a Good Egg Award in recognition for sourcing eggs from free-range or barn hens instead of caged hens.

The House of Commons led the way for cage-free catering in public bodies, receiving its Good Egg Award in March this year; a move that has been followed by a number of local councils around the country as part of Compassion in World Farming's Cage-free Councils campaign.