Team London Bridge has announced that it will continue to fund last year's successful applicants to the Building Bridges fund. 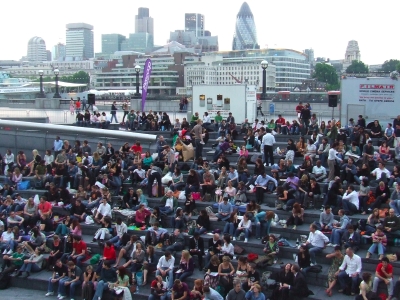 The Scoop at More London

Team London Bridge (formerly London Bridge BID) says that although 21 very high quality applications were submitted, it was clear that both Southwark Mediation Centre and The Steam Industry's free theatre at The Scoop have been able to start moving toward long-term sustainability partly due to this funding. Both projects also have long term benefits for the businesses and the local community.

The Steam Industry is now well-known for its summer programme of free open-air performances at The Scoop next to City Hall.

This year The Steam Industry will be focusing one of their projects on refugees in Southwark, developing chronicles of their experiences, which, it is hoped, will increase levels of understanding and tolerance.

"We are delighted that Team London Bridge businesses have decided to continue supporting the work that we do in The Scoop at More London and with the local community," says producer Suzanna Rosenthal. "We are really looking forward to developing our new outreach initiatives and to collaborating with Team London Bridge in the future."

Southwark Mediation Centre will be continuing its work with young people at Bacon's College in Rotherhithe training them as mediators who then help resolve conflict in the college. In the coming year the mediators will be offering their services to all schools and youth organisations in Southwark focusing on resolving antisocial behaviour, conflict and exclusion. The Southwark Mediators have been promoting their work on an international audience recently, including delegations from South Africa, Asia and the Middle East.

"We're so proud to be able to offer these funds to local community groups and charities," says Team London Bridge executive director Nadia Broccardo. "When we set up Team London Bridge, one of the reasons for having the funds was to enable every business who contributed to the business improvement district to easily take part in an area-wide corporate responsibility scheme. Both our grant schemes are working really well and this year we are looking at even more ways to bring the business and community together."