London Eye capsules to be floated down the Thames for refurbishment

Each of the London Eye's 32 capsules will be taken in turn by barge down the Thames for refurbishment between now and the 2012 Olympic Games, it was announced on Monday. 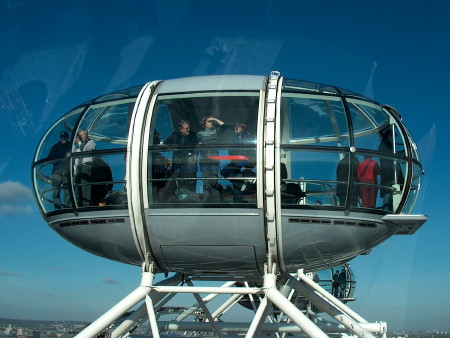 Merlin Entertainments – who also own the London Dungeon – bought the London Eye just over two years ago and have now announced plans to invest approximately Ł12.5 million to upgrade the UK's number one paid-for visitor attraction.

The observation wheel on the South Bank has received more than 33 million visitors since it opened to the public in 2000.

The programme to remove and upgrade each of the 32 capsules starts this summer and is scheduled be completed in time for the London 2012 Olympics. Normal operation of the wheel will be unaffected.

As each capsule is removed it will travel down the Thames to Silvertown where it will be loaded onto a truck and transported to a workshop in Worcester. A non-operational capsule will take its place on the London Eye until the refurbished capsule is returned.

"This will ensure the London Eye operates at maximum efficiency and is cutting down its carbon footprint well into the future," says David Sharpe of Merlin Entertainments.

"Merlin believes that investment is more important than ever in the current economic climate when both local and international visitors to attractions like the London Eye are looking for real value for their leisure pound.

"Investments like these are also very important in the leisure and tourism industry in the UK as a whole, especially with the Olympics coming to London in 2012."

In 2005 one of the Eye's capsules was removed to assess the effects of the first five years of operation and to explore what could be done to improve the experience for visitors, the structure's longevity and environmental sustainability.

Merlin Entertainments claim that this latest project will ensure that no major maintenance works will be necessary on the capsules for the next 15 to 20 years.

The heating and ventilation system will be upgraded to a more efficient, environmentally friendly one.

One of the upgraded capsules will include four ceiling-mounted screens and enhanced multimedia and wi-fi capabilities enabling the capsule to provide music and on-screen visuals.

Merlin Entertainments has recently completed a revamp of the nearby Sea Life London Aquarium at County Hall.