Wine expert Oz Clarke and the Mayor of Southwark Cllr Jeff Hook cut a ribbon on Tuesday to mark the release of 1000 balloons from Bank End to celebrate the 10th anniversary of the opening of Vinopolis. 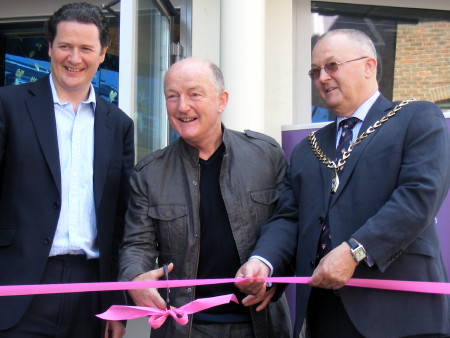 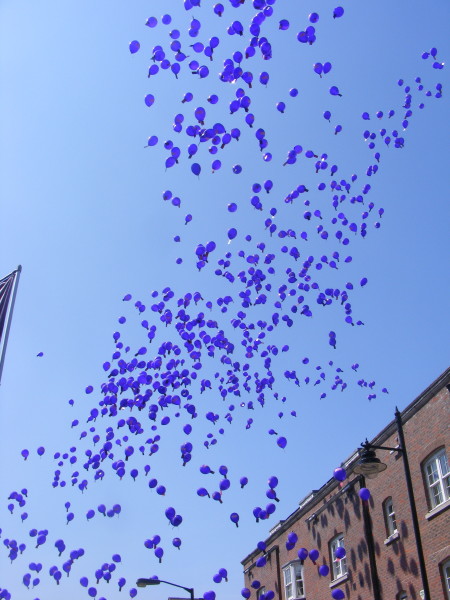 1,000 balloons soared high about Bank End. Each has two tickets to Vinopolis attached. The person who finds the balloon which travels furthest will win a mystery prize.

The wine tasting attraction and corporate entertainment venue opened in July 1999 in the railway arches under the southern approach to the Cannon Street bridge.

Managing director Rupert Ellwood described how the area has changed over the last decade with the emergence of Borough Market as a retail centre.

"Vinopolis was the brainchild of Duncan Vaughan-Arbuckle, who was a wine merchant, and he had this idea of creating London's first wine tasting destination. And 10 years on that is till the core theme for Vinopolis."

Ellwood described how Vinopolis, which employs 240 staff, is a sought-after venue for events ranging from rock concerts to company conferences. The final of the most recent series of The Apprentice was filmed at the Bank End attraction.

He also talked about the company's controversial plans for a 24-hour bakery and new shops in Brew Wharf Yard.

Mayor of London Boris Johnson sent a message of congratulations to the company.

"When it opened in 1999 Vinopolis was one of the first forward-thinking businesses to invest in the Borough area," said Mr Johnson.

"Their development of what was a derelict brownfield site helped transform it into a vibrant, much-visited area of the capital. Just like fine wine, Vinopolis has matured over 10 years."

In his speech Oz Clarke described Vinopolis as a "home from home" where he could come and reconnect with people who are enthusiastic about wine.

"We de-mystify wine here, but we don't de-magic wine," said Mr Clarke. "We keep the magic, we remove the mystery. We've done it for 10 years and we hope to do it for a lot longer."