Visitors to the London Eye on the South Bank can now enjoy an exhilarating multi-sensory tour of London's landmarks at County Hall before they set foot on the observation wheel. 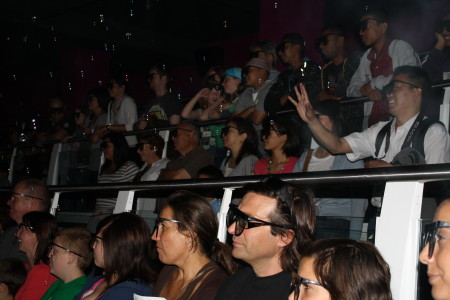 The four-minute film is a full-on assault on the visitor's senses and is in stark contrast to the graceful, sedate experience of a flight on the London Eye itself.

Visitors will feel the wind in their hair, see snow falling at their feet and even experience the smell of the annual new year fireworks display.

The 4D experience is included in the standard ticket price for a London Eye flight. Every eight minutes up to 160 people will collect their 3D glasses and pass through the new cinema en route from the ticket office to the wheel itself.

"I was delighted to be asked to work on such an exciting and innovative project bringing cutting-edge cinematic techniques to one of the country's – and the world's – most iconic landmarks," says director and screenwriter Julian Napier.

"We are truly at the outset of a new and exciting era for 3D film-making and the London Eye experience is right up their helping to lead the way."

The film, made by Centre Screen Productions, includes the first ever 3D aerial footage of London.

Permission was granted by Lambeth Council at the end of last year for the creation of the new cinema in the grade II listed County Hall building.

The Ł5 million investment in the film and cinema is part of a Ł17.5 million scheme to improve the attraction as it approaches its tenth birthday.

At the end of June a programme to refurbish the 32 capsules began when the first pod was floated away down the Thames on a barge.

To coincide with the launch of the 4D cinema the attraction has revealed its new logo. The wheel is now being promoted as the 'Merlin Entertainments London Eye' in a bid to raise the profile of the world's second-largest operator of tourist attractions.

Merlin Entertainments, whose London portfolio includes the Sea Life London Aquarium and the London Dungeon as well as Madam Tussauds, bought the wheel two years ago.

From its launch in 2000 the wheel carried the British Airways name until the airline severed its ties with the attraction in January 2008.

At the time the wheel's owners said that they were looking for another sponsor to take on the naming rights for the attraction.

"It's true that we're in constant dialogue with people who are potentially interested in sponsoring the London Eye," Merlin chief executive Nick Varney told the London SE1 website.

"The truth is that in the preceding years nobody came up with a value that we thought represented what this was worth.

"Therefore when we decided to press ahead with a Ł17.5 million investment we had our own objectives in raising Merlin's profile for a whole host of reasons."

He added: "I think the London Eye is a dynamic, fresh and very energetic brand. Any residual associations with its previous ownership I think we want to dispel. On all fronts it made sense for us to put Merlin Entertainments in the logo."