About 30 residents and council officials gathered in the new £160,000 car-free piazza at the junction of Trinity Street and Great Dover Street on Monday night to sing carols and celebrate the completion of work. 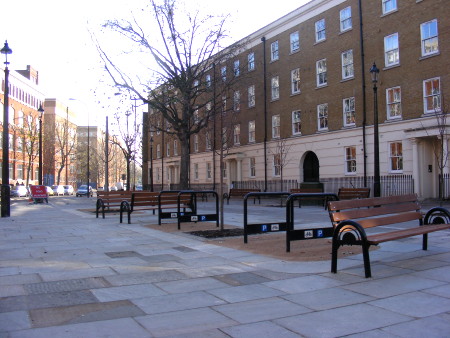 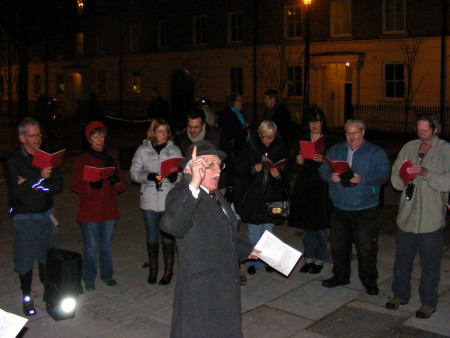 Carol-singing outside The Roebuck on Monday night

The story of Trinity Street and its closure to through motor traffic is a long and tortuous one. The street has had gates across it since 2002. In 2003 the Great Dover Street junction by The Roebuck was closed on an experimental basis with unsightly concrete blocks.

The road closure – and its impact on nearby streets – has been the subject of many public meetings and heated debates, including a special meeting of Borough & Bankside Community Council in 2006.

In 2004 councillors decided to make the junction closure permanent and now the area has been re-landscaped with new provision for cyclists and pedestrians.

Chaucer ward councillors Tim McNally and Lorraine Zuleta cut a ribbon on Monday night to mark the completion of works.

"This has been a long time coming," Cllr Tim McNally told guests at the 'closing ceremony' for the road junction.

"There are some here who would say that it has been 25 years in coming. Certainly I know from the years that I spent on the committee of the Trinity Newington Residents' Association that we campaigned for many years to get this closure made."

He added: "We've had a lot of help from Cleaner Greener Safer money awarded by the local councillors. We've had the ceaseless efforts of TNRA, Chadwick and Lawson Estate.

"We had support from developers through section 106 money and we've had money from TfL so the original Ł40,000 bid for by TNRA has transformed into a scheme costing over four times that much."