A grid of 25 trees has been planted within a mirrored box in Emma Cons Gardens to create the feeling of being inside an endless reflected forest. 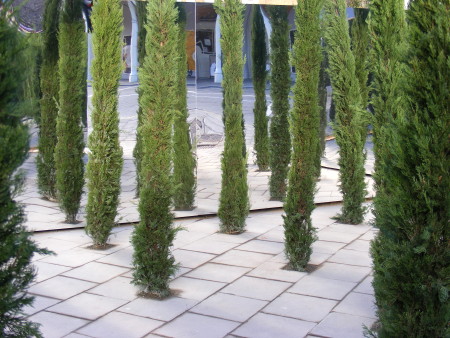 Commissioned by Waterloo Quarter Business Alliance, 'Forest' is situated in Emma Cons Gardens opposite The Old Vic and will be in position for eight weeks.

From the centre of the square the trees and viewer will be endlessly reflected creating the effect of being deep within a forest.

"I hope that by creating a chance to walk through 'Forest' on a daily commute people will think differently about living far from nature, and question their usage of resources and their responsibility for the world's forests," says Deborah Nagan, whose naganJohnson practice is based in Pontypool Place.

From the exterior the entire installation is covered in a life-size image of the northern hemisphere's Boreal Forests. The Boreal is the world's largest storehouse of terrestrial carbon yet 60 per cent has been allocated to forestry companies for development and less than 10 per cent is formally protected.

'Forest' was unveiled at the 'Christmas in Waterloo' event on Thursday night.

The installation has been funded by contributions from local businesses. Individual trees have been sponsored by firms including CP Hart, Cubana and Meson Don Felipe.

After the two month installation period, the components of the piece will be donated to interested local organisations or recycled

Waterloo Quarter BID says that importing the trees from Italy created 0.04 tonnes of carbon dioxide with an offset value of 39p. The BID is making a contribution of £100 to Trees for Cities, a charity dedicated to tree-planting in urban areas.

Work is due to start next year on a major revamp of Emma Cons Gardens in association with the owners of the adjacent Mercury House office building and Waterloo Brasserie.