"The Liberal Democrats guarantee to make Southwark a fairer, greener and better place to live, work, visit and bring up children," said Nick Stanton at the launch of his party's local election manifesto. 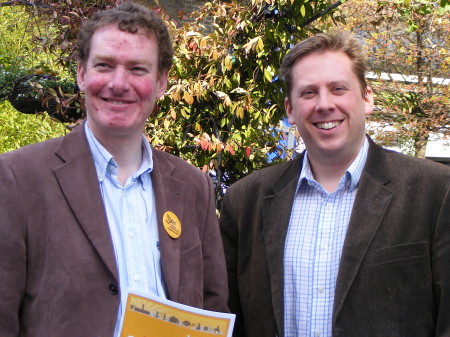 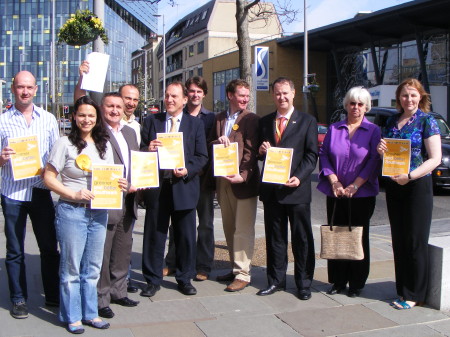 Nick Stanton added that he and his colleagues were committed to community councils and continuing the Cleaner Greener Safer initiatives.

The manifesto includes a programme for each community council area. Among the eight priorities for Borough & Bankside are improvements to Mint Street Park and Dickens Square Park.

Adele Morris, standing for reelection in Cathedrals Ward, spoke about working with Transport for London to improve Borough High Street. "It's not just about streetscape but about what we can do to to getting it into being a proper high street."

Tim McNally, seeking another term in Chaucer Ward, added: "We do not want gaming centres but quality shops. It's a real opportunity."

The Bermondsey ten point plan highlights the launch of a vision for the future of the Old Kent Road as a centre for green technology, demolition of the Bricklayers Arms flyover and sympathetic development next to Potters Fields Park.

Ashley Lumsden, Lambeth's Liberal Democrat opposition leader who had been invited to comment on policies 'across the border' in Labour Lambeth, said: "You are going to create 1,800 family homes and that is something missing in Labour's manifesto in Lambeth.

"There are 1,500 empty council homes in Lambeth which is the highest in London. That is costing Ł8m a year in lost rent. We now have a special contract for boarding up our properties worth Ł300,000 a year."

Highlighting Lambeth's libraries which shut at short notice and a closed swimming pool, Mr Lumsden added: "These are the sort of problems you don't want."

The presence of Lambeth's Cllr Lumsden at the Southwark Lib Dem launch follows Labour's pledge to share services between Lambeth and Southwark if the party wins control of both councils.

He expressed a hope that there would a majority Liberal Democrat administration at the Town Hall with a Liberal Democrat member leading the housing programme rather than the present situation where the party relies on Conservative support.

The Southwark Liberal Democrat 'Six to Fix' manifesto promises are:

1 Protect those on low and fixed incomes by keeping Southwark's council tax below the London average.

2 Tackle overcrowding by making at least 1800 family homes available for rent via the council's Home Search over the next 4 years.

3 Build a new recycling centre on the Old Kent Road so that recycling can increase by 2014 to more than 10 times the maximum level achieved under Labour.

4 Boost the opportunities for local young people to get a good education and meet the need for more school places by opening three more new secondary schools by 2014 and making sure children have a good primary school place within a mile of their home.

5 Give people more say over how their council tax is spent by handing over more local decisions and money to Community Councils.

6 Create a 'Senior Citizen Support Team' to help senior citizens with housing, money and health issues and make sure they access all the benfits and entitlements they are due.