Lambeth Council is preparing to enter formal talks with the Oasis group of charities over the potential redevelopment of the Oasis Academy Johanna primary school site in Waterloo, to include an expanded school, homes, offices and a public library. 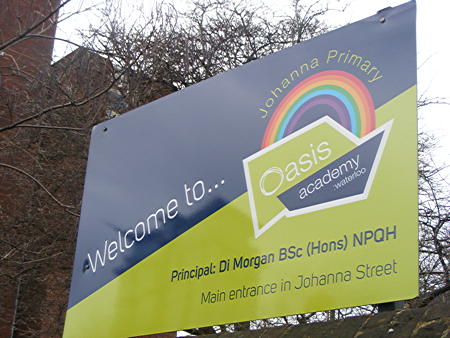 Johanna – Waterloo's only primary school – became an academy as part of the Oasis group in 2011.

Now Lambeth Council officers are preparing to sign a memorandum of understanding with Oasis Community Learning to pave the way for formal talks to discuss the potential to redevelop the site which sits between Lower Marsh and Baylis Road in the heart of Waterloo.

A future redevelopment could include a permanent home for Waterloo Library – currently in temporary premises at the Oasis Centre – as well as allowing the primary school to expand to two forms of entry.

"We are at an extremely early stage in the process, but having an agreement in place will ensure that all opportunities are explored and any future development is right for the area," said Cllr Matthew Bennett, Lambeth's cabinet member for business, regeneration and jobs.

"It's important to explore what sites like the Oasis Academy Johanna can offer – making sure that the school building itself is fit for purpose, while looking at what else could be provided for the local community."

"In more recent years we've invested in the school library, ICT suite and music room, but strained resources and the rising costs of future maintenance oblige us to consider the long term.

"Oasis' foundational goal is to work alongside others for the benefit of the whole community.

"We're doing just that by delivering high quality education through the Johanna and South Bank Academies as well as by hosting the Waterloo neighbourhood library.

"We are excited by the opportunity of exploring the possible redevelopment of Johanna's site in order to create new educational facilities, perhaps including an extended provision for children with physical disabilities, as well as other assets for the local community including a new neighbourhood library."