Hundreds gather for funeral of Hilary Wines, past Mayor of Southwark

The funeral of former Southwark Mayor Hilary Wines was held at St George's Cathedral on Saturday morning in the presence of a large congregation. 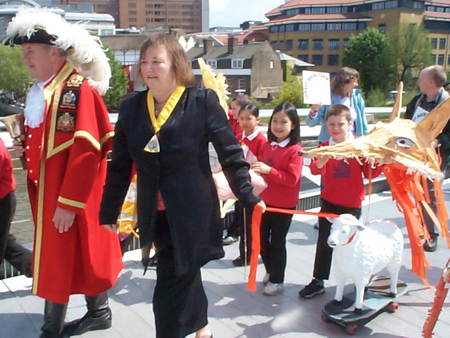 Hilary Wines pictured as Mayor of Southwark in May 2002, leading a fibreglass sheep across the Millennium Bridge to raise funds for Surrey Docks Farm 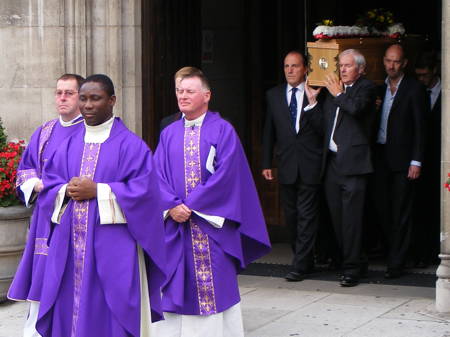 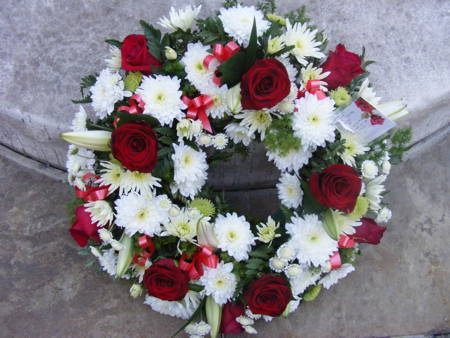 On Friday evening Simon Hughes MP, Cllr Adele Morris and Cllr David Noakes laid a wreath at the Borough War Memorial in memory of Hilary. Hilary was the driving force behind the annual Remembrance Sunday ceremony in Borough High Street

Hilary's body had been brought to the cathedral on Friday evening by way of the Borough War Memorial and Marshalsea Road where the hearse paused outside her home.

Around fifty people were waiting outside the cathedral to witness the reception of her body. The Dean of Southwark Colin Slee and the Anglican cathedral's canon pastor Bruce Saunders were among clergy present in the church.

"Hilary's been a huge part of my life for over 25 years," Simon Hughes MP told the funeral congregation on Saturday morning. "She was one of my dearest and most loyal friends and an hugely important person to me."

The principal celebrant at the funeral Mass, cathedral dean Canon James Cronin, quoted Mark Twain who said that 'we should live in such a way that even the undertaker should be sad when we die'. Canon Cronin added that both he and funeral director Barry Albin-Dyer had agreed that they were both saddened by Hilary's death.

At the close of the service the coffin was borne out of the church on the shoulders of Simon Hughes, councillors David Noakes, Geoffrey Thornton, Graham Neale and other friends. Immediately following was Cllr Adele Morris who had known Hilary for many years as well as being a successor in Cathedrals ward.

The congregation included the current Mayor of Southwark Cllr Tayo Situ, council leader Peter John and opposition leader Anood Al-Samerai, as well as many of their predecessors.

Afterwards mourners were invited to the Amigo Hall for a reception which was described as "the sort of party Hilary would like" with "cake and wine". The refreshments were provided by Ministry of Sound founder James Palumbo who spoke warmly of his long friendship with Hilary.

Hilary Wines, who died last month, was the first Liberal Democrat to become Mayor of Southwark.

During her year of office she led 2,000 pedestrians on a test crossing of the Millennium Bridge to ensure that modifications to cure the infamous wobble had been successful.

Hilary was the leading councillor for Cathedral ward for 16 years during which she worked tirelessly for her constituents. At the end she was exhausted; it was difficult to walk down a street without someone presenting her with new casework.

She was born in 1944 at Purley in Surrey. Her father was general secretary of the civil service union with members in Gibraltar and as a result Hilary visited the British territory which became a second home in adult life.

As a young woman she trained with British Caledonian to be an air stewardess before a series of other jobs. In her twenties she was received into the Roman Catholic Church and briefly joined a religious nursing order in Guildford before being a Benedictine novice at a convent in Cockfosters from 1970 to 1978.

When she arrived in SE1 at the end of the 1970s she first attended the Church of the Precious Blood where in time she exercised a lay ministry as a reader, minister of the Eucharist and unofficial pastoral worker. At the time it was a thriving church with the well-known Mgr Anthony Reynolds as parish priest. More recently, when there was no priest to celebrate a weekday Mass, Hilary presided at Communion services.

She was responsible for restoring the annual Remembrance Sunday observance at the Borough War Memorial and up to last November organised the short ecumenical service and wreath-laying.

Hilary was more qualified for her role than many knew for having stepped down from the council she studied pastoral theology at Heythrop College. In her last years she attended St George's Cathedral.

Hilary's Christian faith was her driving force for entering politics. The execution of Derek Bentley led her to campaign against the death penalty as well as working for his pardon. She first joined the Social Democratic Party but following the 1983 Bermondsey by-election she applied to join Liberal MP Simon Hughes' first staff team. This involved more pastoral work among constituents and in the 1986 council elections she stood and won a seat in Cathedral ward.

She was the ward's first Liberal councillor and her work laid the firm foundation for all three seats within the ward remaining in Liberal Democrat hands at the council election earlier this year. Thanks partly to Hilary it has been known since 2002 as Cathedrals ward to acknowledge that both the Anglican and the Roman Catholic cathedrals are within its boundary.

Hilary Wines was, before being Mayor, Liberal Democrat leader of the opposition on the council.

Like Simon Hughes, she was a familiar face at many meetings and campaigns including the ones to save Guy's Hospital and Borough Market. She was also chair of governors at Friars Primary School.

Her link with Gibraltar led her to be a strong campaigner for the right of Gibraltar to remain a British overseas territory independent of Spain. She had an important influence on the Liberal Democrat policy in this area and was a familiar figure at the Gibraltar stall and reception at all three party conferences. She maintained an address there which she called home and regularly visited. In last year's European Election she campaigned in Gibraltar for Liberal Democrat MEP Graham Watson.

Hilary's birthday was St George's Day 23 April which she shared with one of her many friends former Archbishop of Southwark Michael Bowen. She loved wearing her flashing St George badge on the day. She was naturally a strong and active supporter of the St George in Southwark Festival. One of her last appearances was at a festival committee meeting in June where she made a vigorous intervention although in great pain.

She was skilled at embroidery and needlework, looking after vestments at both St George's Cathedral and the Precious Blood church, and enjoyed crosswords. Although not a cook, indeed for a long time she found herself eating out at official functions or cafes more than at home, she loved good food and drink.

She had a fascination for the image of the owl; various representations filled her home in Marshalsea Road's Ilfracombe Flats. She read widely and was in the middle of a second degree when taken ill at the end of January.

She was admitted to hospital and although diagnosed with cancer she managed to be discharged in time for Easter Day. A month later she was present at the General Election count to see Simon Hughes returned yet again as MP.

Her respite this summer was short although she was seen at church and walking briskly across Mint Street Park. It was her wish that she should die at Trinity Hospice at Clapham.

She had been due to lead the intercessions at Mass on the Feast of the Assumption. She died three days before but the prayers were left written for her stand-in.

Hilary Wines' ashes will eventually be scattered on the River Thames and the Rock of Gilbraltar as well as in Albin's Memorial Garden in Rotherhithe.