A blue plaque was unveiled in Bermondsey Square on Saturday as a visible reminder of the medieval Bermondsey Abbey, the remains of which are conserved below the 21st century development. 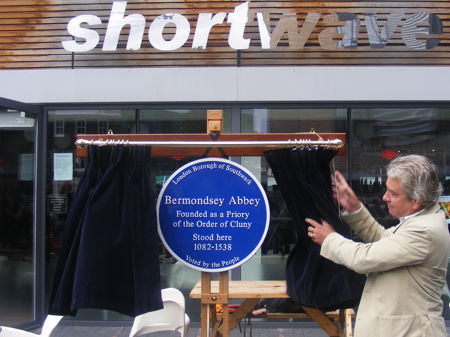 Each year Southwark Council holds a public vote to decide which local people and places should be commemorated with a plaque.

Bermondsey Abbey was chosen in spring 2009 and the plaque will eventually be installed permanently on the side wall of the Shortwave Cinema.

On Saturday former local history librarian Stephen Humphrey organised an afternoon meeting about the history of the abbey.

About 80 people gathered in St Mary Magdalen church in Bermondsey Street to hear Stephen Humphrey explain the significance of the Benedictine Cluny Abbey in France – Bermondsey's mother house – which was founded exactly 1,100 years ago.

Alistair Douglas of Pre-Construct Archaeology gave a talk about the excavations carried out prior to the Bermondsey Square redevelopment which have helped experts to form a much better understanding about the layout and extent of the abbey buildings.

The remains of the south-western tower of the abbey church can be seen below the floor of the Del'Aziz restaurant and bar.

After the talks at St Mary Magdalen the focus moved to Bermondsey Square where Alistair Douglas unveiled the blue plaque on a temporary easel.

Cllr Veronica Ward, Southwark Council's cabinet member for culture, leisure, sport and the Olympics, gave a speech in which she welcomed the installation of the plaque and the efforts to ensure that Bermondsey Abbey is not forgotten.

She described the dissolution of the monasteries by Henry VIII as "one of the worst things that this country has ever suffered".

Simon Hughes MP and Chaucer ward councillor Tim McNally were also present at the unveiling of the plaque.

• On Wednesday 22 September Stephen Humphrey is leading A Bermondsey Abbey Walk highlighting the remaining visible traces of the monastic complex.