Dozens of rarely seen images of Southwark held in the collection of Southwark Council are on show at the Cuming Museum until the end of the month. 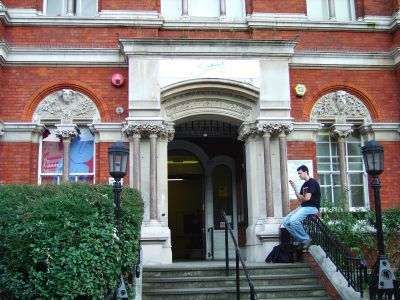 Whilst perhaps two-thirds of the gallery is devoted to Camberwell and Peckham, there is plenty to interest the Borough or Bermondsey resident too.

Sadly the pictures of the Elephant & Castle and Dulwich areas have been removed from display due to flood damage.

Images include an 1884 drawing of the White Hart inn off Borough High Street by Philip Norman.

There is also an 1813 watercolour of St Olave's School in Tooley Street alongside what we now know as Potters Fields Park.

An image captioned c1930, but presumably from the late 1920s, shows the crumbling remains of the church of St Olave's at the west end of Tooley Street before the tower was demolished.

The exhibition includes four 1971 watercolours of Bermondsey Street by Herbert J Litterick which provide a valuable snapshot of the changing fortunes of that thoroughfare.

A watercolour by James Lawson Stewart depicts the gatehouse of Bermondsey Abbey (demolished 1760). The caption notes that some of the stonework from this gateway is incorporated into the present building at 7 Grange Walk.

A more modern image is the Star Music Hall which stood on Abbey Street at the top end of Neckinger. It is recorded by the pen of Geoffrey Scowcroft Fletcher.

• [url=http://www.london-se1.co.uk/whatson/event/7228/lost-southwark]Lost Southwark is at the Cuming Museum in Walworth Road SE17 until Saturday 29 August. The museum is open Tue-Sat 10am-5pm; admission is free