Southwark Cathedral's congregation processed on to London Bridge on Sunday to meet members of the City's St Magnus Church for the annual river blessing. Fr Philip Warner of St Magnus in the City procession 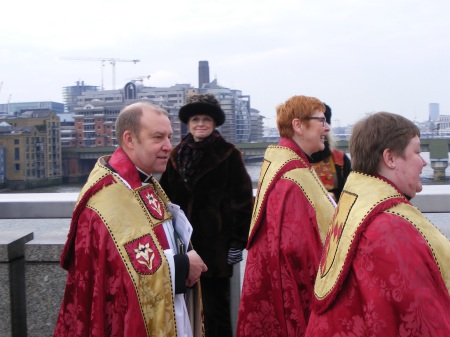 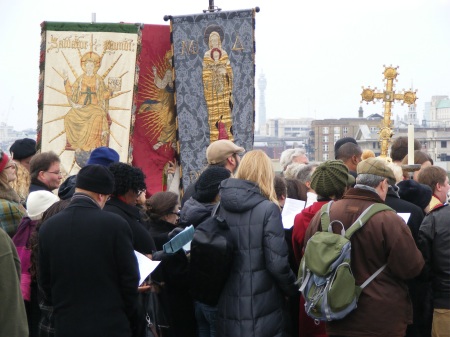 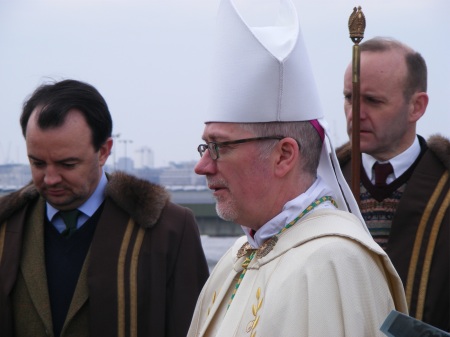 Until the Victorians realigned London Bridge, the crossing's northern end landed outside St Magnus which from early times was known as 'the church of St Magnus at the foot of London Bridge'. For a time its priest was chosen by Bermondsey Abbey.

Although Bishop of Croydon Jonathan Clark is a Southwark bishop he arrived in the St Magnus procession having preached at the City church's Baptism Sunday Solemn Mass.

The Thames tradition follows the Orthodox custom of hurling a cross into water as a symbol of Christ's birth and baptism which is celebrated at this time of the year.

A similar ceremony presided over by a Greek Orthodox bishop took place on Margate beach in the Thames estuary last week.

This year the London Bridge blessing was on the upstream side from where the Bishop of Croydon threw the specially made wooden cross down into a rising tide.

Earlier there had been prayers for the victims of the Marchioness disaster who are commemorated in Southwark Cathedral. Among those watching the floating cross was a Marchioness survivor.

In the afternoon the Bishop was at Southwark Cathedral when Stephen Hance was installed as the Canon Missioner.