The developers of Sea Containers House on the South Bank have announced that the proposed new hotel in the building will be operated by Morgans Hotel Group under the Mondrian brand. 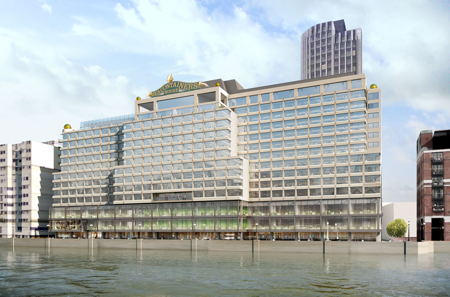 Archlane recently applied for planning permission to convert part of the 1970s building near Blackfriars Bridge into a 356-bedroom hotel.

The complex was built as a 750-room hotel by the Anglo-Spanish Melia Buckley consortium but was converted into offices before the hotel opened.

Part of the building will be restored to its original intended use if Archlane's plans for a "high-end, contemporary" hotel are approved.

The Morgans Hotel Group operates two other hotels in central London; Sanderson and St Martins Lane. There are currently three Mondrian hotels – in Miami, LA and New York – with two more hotels planned in Doha and the Bahamas. Mondrian at Sea Containers House would be the first European hotel under the Mondrian brand.

"We are delighted to have Morgans on board," says Marcus Rose of Deerbrook Ltd, asset manager for Archlane Ltd. "We worked hard to find the right fit for Sea Containers House and the South Bank. Mondrian is exactly what we feel is needed to help reinvigorate the local area."

The proposed refurbishment of Sea Containers House includes new shops and restaurants on the riverside walkway and a new 9-storey office building in the current car park.

Several designers based at Oxo Tower Wharf have submitted objections to Archlane's planning application because of fears that the new block will reduce natural light levels in the courtyard north of the Bargehouse.