London's Norwegian community has gathered in Southwark Cathedral at a memorial service for the 77 people killed in an explosion and mass shooting in July. 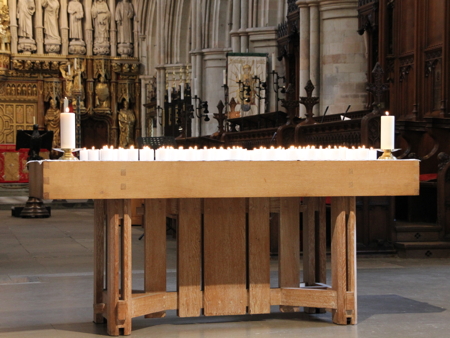 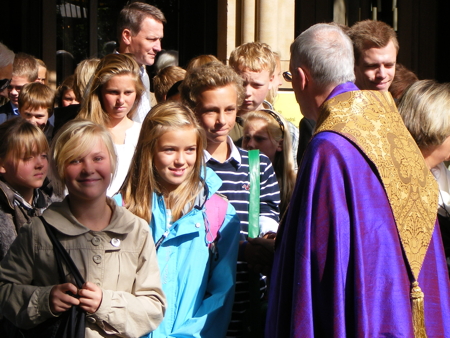 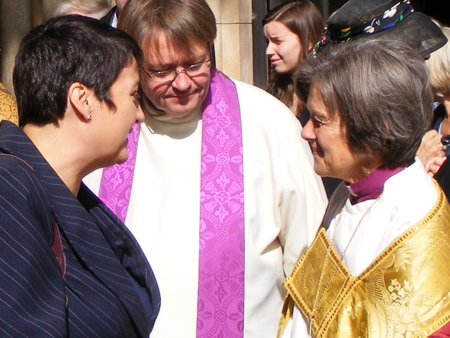 Val Shawcross AM with Revd Torbjorn Holt, chaplain at Rotherhithe's Norwegian Church, and the Most Revd Helga Haugland Byfuglien, presiding bishop of Norway 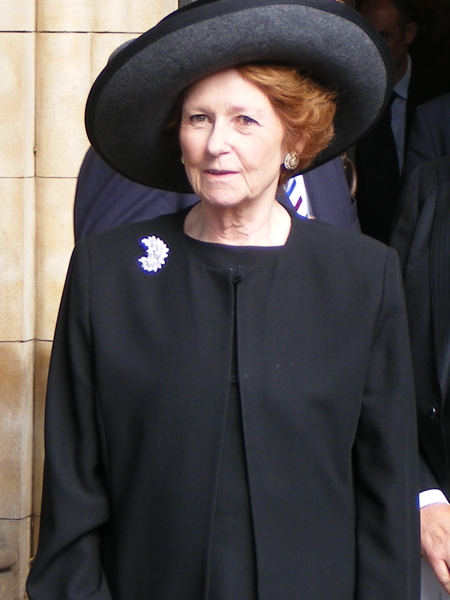 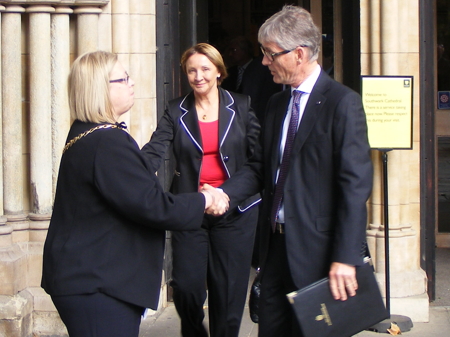 The Mayor of Southwark and the Norwegian Ambassador exchange a few words, watched by Southwark Council chief executive Annie Shepperd

The service on Friday morning took place two months after the a lone gunman, who had set off a huge explosion in Oslo, landed on Utřya island to shoot Labour Party youth members enjoying a summer camp.

During the act of commemoration the names of the 77 victims who died on 22 July were read by Sondre Tunstad, president of the UK Norwegians students association, and Marta Gjortz, a member of the London AUF (Norwegian Labour youth).

This was followed by the placing of 77 candles on the nave altar. The procession was led by pupils from Cathedral School and Norwegian children. Among the adults taking part was Norwegian Halldor Fossa from RBS at Bankside Mix.

Afterwards James Kirby sang a song which he had written for the funeral of his cousin Bendik Rosnes Ellingsen who died at Utoya.

Norwegian ambassador Kim Traavik said: "Just as 9/11 irrevocably changes the lives of New Yorkers and just as 7/7 will never be forgotten by Lononers and Britons so 22/7 stands out in the minds of all Norwegians as a day of darkness, despondency and despair."

Helga Haugland Byfuglien, who is to be installed shortly as presiding bishop of Norway, took as her text a passage from Corinthians 13: 'For now we see in a mirror dimly, but then we shall see face to face; now I know only in part, but then I will know fully even as I also have been fully known. And now faith, hope, love, abide. These three; and the greatest of these is love.'

"Norway has experienced this truth in these verses in the heavy days and weeks after that Friday in July," she said.

"This love has empowered people to stand up and risk their lives for others. Because we have tales of youngsters swimming in very cold summer water and even protecting their friends from the assassin's bullets with their own bodies."

Acting dean Andrew Nunn spoke of the "peaceful and inclusive nation of Norway" and said that the statue of St Olaf on the great screen was a reminder of the friendship between Britain and Norway.

Simon Hughes MP took up the theme of the "most inseparable links" with Norway beginning a thousand years ago with Olaf pulling down London Bridge to defend the capital. He also noted that Norway won its independence in the year Southwark's church became a cathedral.

After reading a message from Mayor of London Boris Johnson, his deputy Richard Barnes read the lesson in Norwegian.

Ros Saunders, a member of Southwark Cathedral's Unity Group, read the poem It's The dream by Olav H Hauge.

The Bishop of Southwark gave the blessing.

The shadow foreign secretary Douglas Alexander who was also present said: "I am privileged to represent all Labour Party members today at a service to commemorate victims of the atrocities in Norway on 22/7."

Also at the service was Lady Elizabeth Shakerley who is a relative of the Norwegian Royal Family.

The cathedral is twinned with Bergen Cathedral which was represented by Canon Jacob Knudsen who is a regular vistor to Southwark.

Afterwards the congregation was invited to travel by Underground to Bermondsey for a reception at the Norwegian Church in Rotherhithe.