Last week 65 young people from across Southwark came to the Globe Academy in Harper Road for the launch of the borough's new youth council. 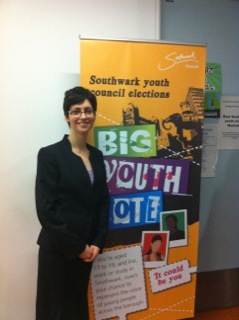 During the launch event prospective youth councillors took part in workshops to help them understand more about the election process and how to stand as a youth council candidate.

Southwark is looking to recruit 20 young residents to become youth councillors, one of whom will represent the borough in the UK Youth Parliament.

Elections will be held in mid-February with polling stations set up in schools across the borough.

Youth councillors serve for a period of two years during which time they are able to gain local political experience.

They have an opportunity to represent young people in Southwark and participate in council decisions affecting them.

A key part of the youth councillor role is to work in partnership with council departments and other local organisations who want to incorporate the views of young people into their work.

"When I was looking to become a youth councillor you had to be elected through the youth community council, but I think this system is a lot fairer," says Ibrahim Bah, 15, a student at Charter School and current youth councillor.

"The launch was fantastic and I was really pleased to see that so many young people interested in becoming a Southwark youth councillor," says Cllr Catherine McDonald, cabinet member for children's services.

"We want to encourage as many young people as possible to consider standing for election – it's really important to make sure young people's voices are strongly heard.

"I am committed to ensuring that young people play more of a part in decision – making and the Southwark Youth Council is a great way to make this happen."

Anyone aged 13 to 19 can apply to become a Southwark youth councillor. The deadline is 13 January.

To find out more about how to become a Southwark youth councillor email [email protected] or contact Davina Bailey on 020 7732 7917.