Bankside’s last derelict warehouse to be redeveloped as apart-hotel

Plans to transform the derelict Empire Warehouse in Bear Gardens, Bankside, into an 8-storey 60-room apart-hotel have been approved by councillors despite vociferous objections from neighbours. 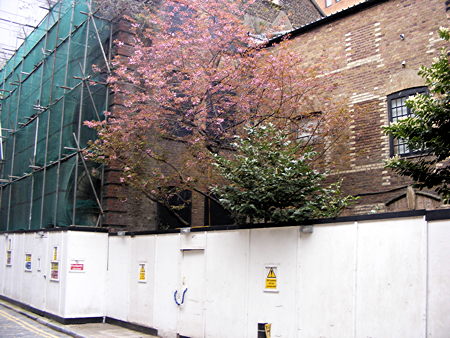 The Empire Warehouse (left) will be demolished and a replica of its external walls built as part of the new apart-hotel. 1 Bear Gardens (right) will be retained and restored for cultural use, possibly by Shakespeare's Globe 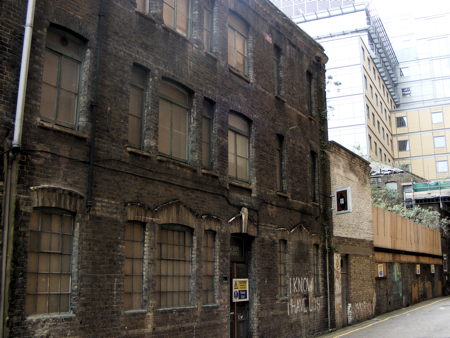 The view from Rose Alley

The Empire Warehouse, which sits between Bear Gardens and Rose Alley, has been vacant since the 1950s. Its condition is now so poor that it will be demolished and replaced with a replica which will be incorporated into the new apart-hotel.

The apart-hotel has been considerable scaled down from the original 127-room proposal first mooted two years ago.

The redevelopment also includes the adjacent building to the south of the Empire Warehouse at 1 Bear Gardens from which Sam Wanamaker ran his campaign to build a replica of Shakespeare's Globe. It was most recently used as artists' studios and galleries.

The 1 Bear Gardens building is to be retained and refurbished as part of the scheme.

The Globe has indicated that is is in discussions with the developers about taking a lease on the building, renewing its historic link with the site which is adjacent to its new Sackler Studios education centre.

Plannning officer Yvonne Lewis told councillors that the design by Spparc architecture is "innovative and interesting and provides a foil to the retained historic fabric".

The planning committee heard from local residents Chris Hughes and Elena Besussi who set out concerns about loss of privacy, extra traffic in Bear Gardens and overdevelopment.

Architect Trevor Morris said: "The proposed scheme is a sensitive and high quality development that is rooted by the rich and varied history of Bear Gardens and in particular the industrial legacy of the current buildings that occupy the site.

"These recognise that the site dictates and deserves a creative yet reserved architectural response."

Cathedrals ward councillor David Noakes addressed the committee to back up the objections raised by local residents.

"This application, in my view, owes more to the economics of realising the price paid for the site than it does to the appropriateness of the scheme."

He added: "It is a very constrained site and this particular proposal is going to have people's hotel rooms 6 metres away from other people's bedrooms and lounges."

The committee voted 5-1 that planning permission should be granted.

Speaking after the meeting, Cllr David Noakes said: "I am deeply disappointed at the failure of officers and the planning committee to impose appropriate conditions on this application or take on board the concerns about the effectiveness of the privacy screens and impact on amenity raised by me and local residents.

"The real tragedy is that it is my constituents who will pay the price of this missed opportunity."