A petition calling on Transport for London to improve road safety on the streets around Elephant & Castle has attracted more than 2,000 signatures after campaigners held a 'day of action' at the junction on Friday. 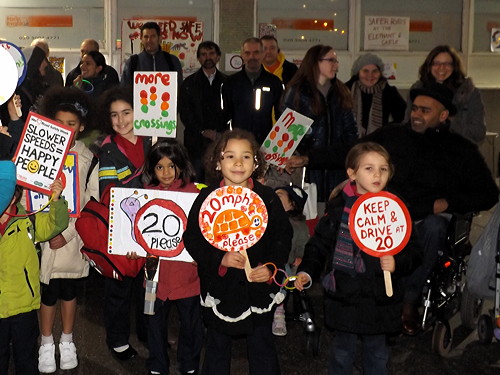 Campaigners at Friday's day of action 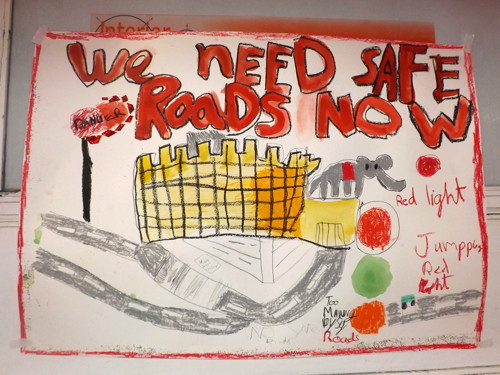 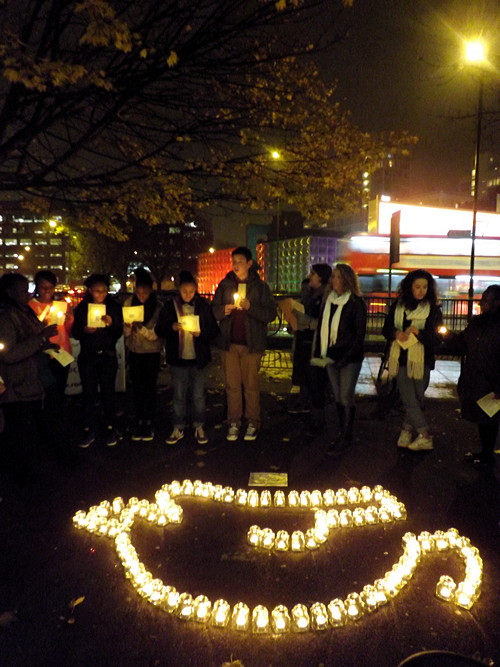 The 'day of action' – held on the forecourt of the London College of Communication – added nearly 1,500 signatures to the 700+ online responses to the petition which was launched at the end of last month.

The campaign was prompted by the recent death of 5-year-old Hichame Bouadimi on St George's Road.

"The trouble is that his death was one of a number in the local area in the past 12 months," explained Southwark Living Streets chair Jeremy Leach.

"We've had four pedestrian deaths and a motorcycle death.

"The bigger picture is that in the past 30 months there have been 300 people killed, seriously injured or slightly injured on the roads around Elephant & Castle, which is a shocking number."

Jeremy explained that the day of action had brought together sustainable transport campaigns like Southwark Living Streets and Southwark Cyclists with a broader coalition of local residents including the Boroughbabies parents' group.

Together they are pressing Transport for London to reduce traffic speeds and introduce more pedestrian crossings on the roads around the Elephant.

The day of action culminated in a candlelit vigil organised by the RoadPeace charity at which the names of all those who have died on London's roads this year were read out.

Politicians who showed their support for the day of action included Green Party London Assembly member Darren Johnson, who recently called for a 20 mph speed limit around the Elephant & Castle.

Labour's Cllr Barrie Hargrove, Southwark cabinet member for transport, told the SE1 website: "Hopefully something good will come out of this terrible tragedy.

"It couldn't be make any clearer: the roads round here do need to be addressed. So this campaign is getting our full backing as an administration.

"On top of that, we've moved a motion to council assembly that Southwark will become a 20 mph borough.

"We're showing that we can do it and we want to see Transport for London do the same."

The next council assembly meeting – to be held in Peckham on Wednesday 28 November – will have transport in Southwark as its theme.

If Southwark Council does decide to introduce a 20 mph speed limit on borough roads, the measure would not apply to TfL-managed roads such as those around the Elephant & Castle junction.

On Monday night the council leader, Cllr Peter John, told a cross-party scrutiny committee that a public announcement from the Mayor of London on transport improvements at the Elephant & Castle is expected "before Christmas".

"We're at a stage where TfL have identified some finance and some potential solutions to the northern roundabout which could be carried out in fairly short order in the next few years," said Cllr John.

"I don't think it's going to answer everyone's aspirations for the northern roundabout, but I think we need to operate on the basis that if we said no, we won't take that, we'll wait for perfection ... we might end up waiting for ever and ever."

In a written statement to the overview and scrutiny committee, Cllr John said that the changes to the junction would have a particular emphasis on improved pedestrian and cyclist safety: "While the detail of this is not confirmed we currently expect this to result in the closure of the subways and their replacement with signalised pedestrian crossings with an enhanced public realm".