More than 180 people spent the night sleeping in sub-zero temperatures in the churchyard of Southwark Cathedral on Friday to raise money for the Robes Project winter night shelter charity. 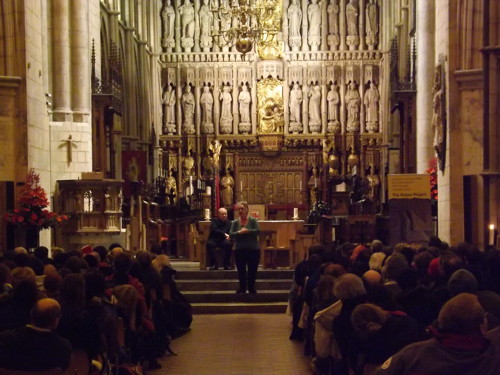 The Robes Project was launched by local churches in 2007 to give rough sleepers in Southwark and Lambeth a warm bed for the night during the coldest weeks of the year.

Local churches organise teams of volunteers who prepare a hot meal and welcome homeless guests in a different church hall every night of the week.

"As we approach Christmas, we're asking people to dig deep so we can help keep our project running through the winter and into the new year," said Robes volunteer George Martin.

For the second year running supporters of the project, including many groups of children and young people, took part in a sponsored sleepout in the grounds of Southwark Cathedral.

Geoff Hand and Louise Delaye, who met as volunteers for the Robes Project at St Matthew's-at-the-Elephant, took part in the Friday night sleepout before getting married in the cathedral on Saturday afternoon.

Before heading out to the churchyard and their sleeping bags, participants were treated to a stand-up routine from Jo Brand in the cathedral.

The cash raised from the two sleepouts has helped Robes to expand the scope of its work and it is about to launch a weekly year-round drop-in for the project's guests to help provide them with ongoing support to find housing, training and employment.

As well as providing much-needed practical support for some of the most vulnerable people in Southwark and Lambeth, the Robes Project has also brought local churches of different traditions closer together.

"The beauty of it is that churches of a number of different denominations work very closely together," said the Bishop of Southwark, Rt Revd Christopher Chessun.

"That has been right at the heart of the ethos of Robes from its earliest days. That we really value because when Christians unite together in a common task, then a real message of hope is generated through the wider community."

Earlier this week the capital's borough councils conducted the latest pan-London count of rough sleepers and Southwark Council has warned that it expects numbers to rise.

Cllr Ian Wingfield, Southwark's deputy Leader and cabinet member for housing, said: "It is shocking that in this day and age, some people still find themselves in such difficult circumstances.

"As a council at the forefront of dealing with the complexity of housing provision, we have a clear commitment and responsibility to prevent homelessness and help when it does happen.

"Committing to building 1,000 new homes is one step in the right direction, as is the independent housing commission report that we're currently looking at.

"We will continue to take an innovative approach in preparation for what might be a tough winter, with more people resorting to rough sleeping during difficult economic times."

• Carol singers will be raising money for the Robes Project at London Bridge Station on Thursday 13 December.

• Find out more at www.robes.org.uk and sponsor the participants at www.justgiving.com/robes