The largest crowd ever was on London Bridge for the annual blessing of the River Thames. 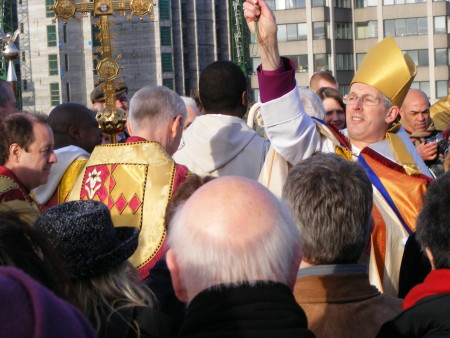 The Bishop of Woolwich sprinkled the crowd with holy water 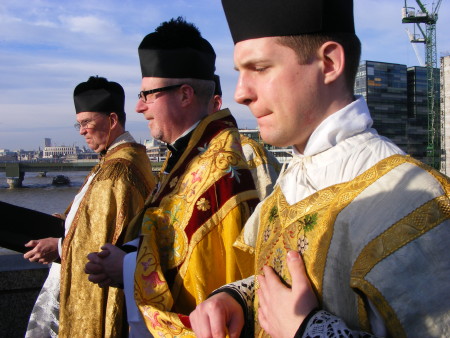 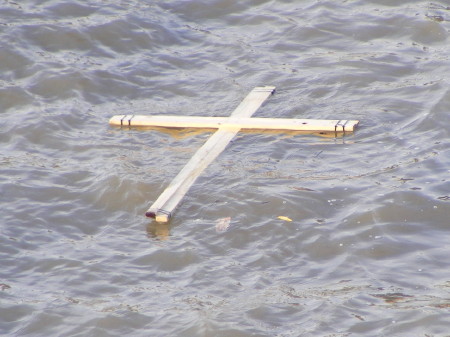 The clergy and congregations of Southwark Cathedral and St Magnus Church, whose parishes meet on the bridge, processed to the centre for a short service. This Thames tradition follows the Orthodox custom of hurling a cross into water as a symbol of Christ's birth and baptism which is celebrated on the Sunday after the Epiphany.

Standing on the City of London-Southwark boundary, Bishop of Woolwich Christopher Chessun threw a wooden cross brought from St Magnus down into the rising water. The tide gently took the cross upstream towards Southwark Bridge.

Earlier there had been prayers for people working on the river including members of the lifeboat service and for those who died in the water during the past year.

Among those present was a survivor of the Marchioness which sank nearby twenty years ago this summer, Master of the Company of Waterman & Lighterman Richard Goddard and Captain Duncan Glass of the Corporation of Trinity House.

The procession from the Southwark side included the Masters of the Glaziers and the Launderers, whose livery halls are on the Southwark bank, and Timothy West and Prunella Scales who were part of the cathedral congregation.

Afterwards the Bishop sprinkled the crowd with blessed water.

This was the first event on the bridge in its 800th year as a permanent stone crossing. The London Bridge Anniversary Fair and Sheep Drive will be held on Saturday 28 March.