London lifeboat crew members saved the lives of a group of four - moments before their speedboat sank to the bottom of the Thames on Sunday afternoon. 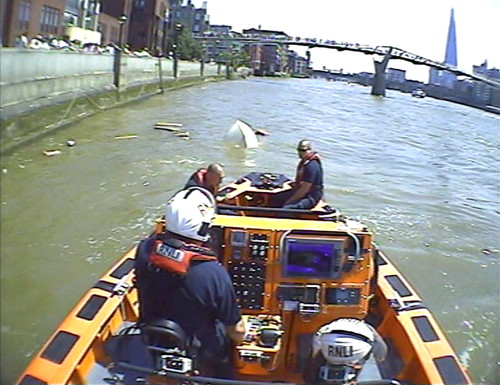 The drama unfolded around 2pm on Sunday 7 July when the group's boat began taking on water close to the Millennium Bridge.

The crew contacted the coastguard by mobile phone and the Tower RNLI raced to the scene.

The lifeboat crew pulled all four occupants of the speedboat to safety with moments to spare as the boat then sank before them.

The incident was captured on the lifeboat's camera, and clearly shows how close the group came to serious danger. None of the group were wearing lifejackets.

Helmsman Stuart Morrison said: "Most of the UK has been basking in glorious sunshine this weekend, and whilst we'd urge people to make the most of it, we'd also remind them of the importance of keeping safe near the water.

"In this instance, we really were there in the nick of time, but had it been different, then these four individuals would have ended up in the Thames without lifejackets."

With the four relieved occupants safely aboard the lifeboat, the crew were able to tether their boat, the bow of which was still sticking out of the water, so that it did not become a hazard to passing vessels.

The Port of London Authority and the London Fire Brigade then arrived on scene to recover the boat.

Chris Walker, Tower RNLI crew member, added: "If you're heading out on the water today, remember to always wear a lifejacket. It might be a warm day but accidents can and do happen."