Snowsfields Primary School has been rated by inspectors as 'good'. 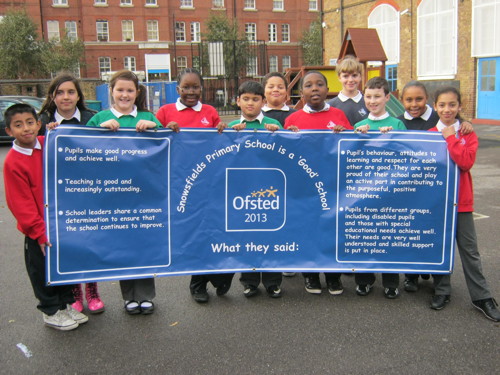 Snowsfields Primary School in Bermondsey is celebrating the results of its latest Ofsted inspection, which comes on the back of being named in the top 100 most improved schools list from the Department of Education last December.

The school was put under notice to improve in February 2009 having been rated as 'inadequate' by inspectors. A further inspection in 2010 returned a verdict of 'satisfactory'.

The most recent inspection was carried out in July and the report – which rated the school as 'good' – was published in September.

Headteacher Kate Wooder said: "We are delighted that Ofsted has joined the list of people that are recognising the improvements that have been made at Snowsfields.

"But we will not be taking it easy and will continue to strive to make Snowsfields one of the best schools in Southwark."

Cllr Dora Dixon-Fyle, Southwark's cabinet member for children's services, said: "Snowsfields has a lot to be proud of with the pupils and staff having put in so much hard work to turn the fortunes of the school around and I am very pleased that this work has been recognised in the latest Ofsted report."

In his letter last year congratulating the school on being named in the top 100 Most Improved list, schools minister David Laws MP wrote: "Mastery of English and maths is critical to success at secondary school and beyond, so these pupils have given themselves a really good start for the next stage of their education. I would like to congratulate staff, governors and pupils for their hard work and service."

• Read the report in full