The new High Steward of Southwark presided for the first time at sittings of Southwark's three Courts Leet. 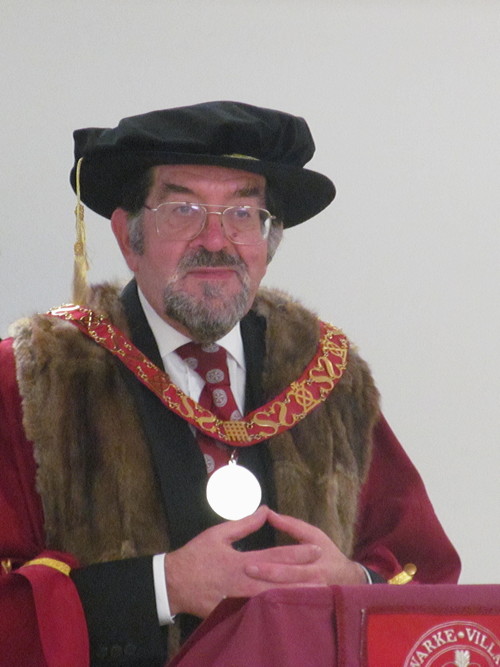 On Wednesday afternoon the High Steward, His Honour Judge Brian Barker, sat first at the King's Manor Court Leet at the Inner London Crown Court in Newington Causeway before going at 3.20pm to a packed Guildable Manor court at the Amigo Hall in Lambeth Road. Finally Judge Barker, accompanied by the High Bailiff of Southwark, arrived at the Boot & Flogger in Redcross Way for the Great Liberty's court sitting.

Judge Brian Barker, Recorder of London, was appointed High Steward by the City of London's Court of Alderman earlier this year following the retirement of Judge Peter Beaumont.

The three ancient Southwark courts leet retain the right to sit as a limited jurisdiction under the Administration of Justice Act 1977.

The new High Steward told the Guildable Manor that it was a privilege to hold the ancient office. His charge took the form of a talk on severe judicial punishment in the past centuries contrasted with the present.

Judy Tayler-Smith was appointed to be aletaster and Ald James Girling to be an alesizer for the parishes of St Saviour's and St Olave's. Prof Frederick Trowman, a former foreman, is now the constable.

Baron Jean-Yves de La Sabliere of Kirkbuddo, having exercised his right as a freeman to drive sheep across London Bridge, received a certificate of confirmation from the Woolmens' Company.

The Guildable Manor boundary runs along the riverside between St Mary Overy Dock and Hay's Galleria and inland to embrace Borough Market. The Manor once appointed market supervisors and from 1932 until 1999 the court was convened in the Borough Market trustees' boardroom.

The Guildable Manor – working with an "ethical developer" such as a housing association – would like to turn the old magistrates court in Tooley Street into an exhibition space and meeting rooms for the community.

In a letter to Peter Handcock, chief executive of Her Majesty's Courts and Tribunal Services, Simon Hughes called on Sir Peter to support the bid given the manor's strong historic and legal heritage.

"I believe that the use of this building for community events and by community groups would be of immense benefit to my constituents living in the SE1 area and beyond," added the MP.

Simon Hughes has warned that unless the Guildable Manor succeeds in buying the 107-year-old court building others might see this as "a purely speculative investment" and any wider benefits to the community would be lost.