250 years after a pub named Elephant & Castle first appeared in local historical records, the successor to that tavern has had its licence revoked. 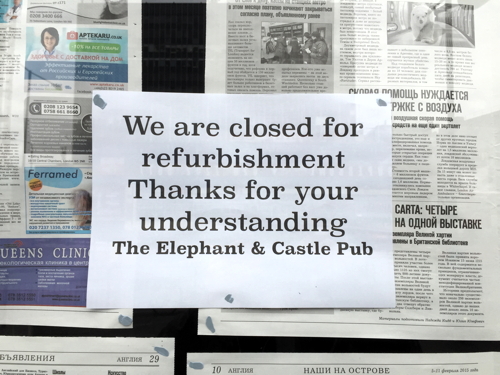 The revocation follows an earlier decision to suspend the licence at the request of the police after a customer was stabbed in the head with a pen with such force that the pen was embedded in their head until it was removed at hospital.

That incident happened at 3.08am on 29 January when the pub was supposed to be closed. The police also claimed that the pub's management failed to inform the emergency services.

Last week's hearing also heard of a further "serious assault" on 31 January. The victim had been drinking at the pub when another customer accused him of sexually touching his girlfriend and then assaulted him, causing facial injuries.

Councillors were told that Guido Guzman Medellin, the sole director of Manggoontong Limited and licence holder for the Elephant & Castle, is also associated with the Royal Standard in Harper Road and Lezet Kebab in Camberwell Road.

The committee heard that police had recently found multiple breaches of licence conditions at Lezet Kebab.

In their decision notice, the councillors concluded: "This licensing sub-committee agree with the Metropolitan Police Service that the premises has no management structure and changes constantly by way of directors of the company (Manggoontong Limited).

"The licensing sub-committee were of the view that Mr Guido Guzman Medellin is not a suitable person to run a licensed premises. He has shown contempt for the licensing conditions at both the Elephant & Castle and Lezet Kebab.

"Mr Medellin breached the conditions on 29 January 2015 by telling the DPS not to have SIA door staff on duty and selling alcohol after the terminal hour. The licensing sub-committee believe that the only option is to revoke this licence."

Mr Guzman Medellin did not attend the latest hearing and was not represented.

The licence holder is able to appeal the council's decision at a magistrates' court but in the meantime the pub is unable to serve alcohol.

The current Elephant & Castle pub on the corner of New Kent Road and Newington Causeway is the successor to the tavern that gave the area its name. The old pub was swept away in the post-war remodelling of the road layout.

The first written record of a local establishment by the name of Elephant & Castle appears in the court leet records of Walworth manor which refer to a meeting at the pub on 21 March 1765.

That document is reproduced in Stephen Humphrey's book on the history of the locality.