A week after his death, public figures in Lambeth and Southwark are continuing to pay tribute to Mayor of Lambeth Mark Bennett. 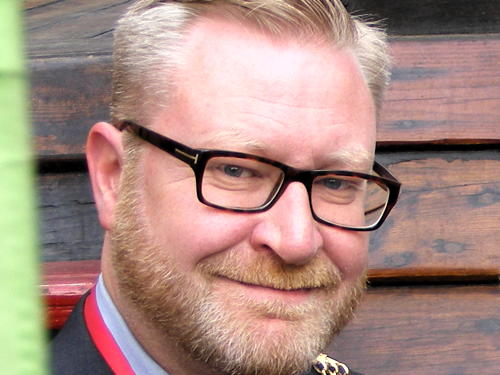 Cllr Mark Bennett pictured in May 2013

Lambeth Council leader Lib Peck told Monday night's cabinet meeting that she was "overwhelmed but not surprised" by the messages the town hall had received since Cllr Bennett's death.

"I think it's very clear that just as Mark loved being Mayor, Lambeth loved him being Mayor," she said.

"So many people across the borough appreciated his ability to find the right tone and words for mayoral occasions – be it inspiration, encouragement or reassurance.

"So many people were touched by his warmth, wit and insight. He will be very much missed."

A minute's silence was observed at the start of the meeting and the borough flag continues to fly at half-mast above Lambeth Town Hall.

The Mayor of Southwark Cllr Abdul Mohamed said: "Mark Bennett had become a friend and buddy in the relatively short time I knew him; you couldn't meet a nicer, gentler, and more selfless man.

"I felt as if I had known him all his life. He was an exhilarating wit with a gentle and urbane banter.

"He and I sailed through some rather dull functions floating on a sea of giggles like we were a couple of naughty schoolboys.

"I still can't believe that this big, vibrant and engaging man is no more."

The Dean of Southwark, Very Revd Andrew Nunn, said: "I am deeply saddened by the sudden and unexpected death of Cllr Mark Bennett.

"He was a great supporter of the work of the Cathedral, not least of the Robes Project for homeless people.

"His courage in standing for the things that he cared about and stood for was exemplary and we will miss him enormously."

The Bishop of Southwark, Rt Revd Christopher Chessun, said: "I was shocked and deeply saddened to hear the news of Mark Bennett's death. He always appeared to be so full of energy and life.

"Mark was a person whose passion for the people he served, both as a ward councillor and as Mayor, shone through in all he sought to do and achieve.

"His support for issues close to his heart demonstrated his deep concern for those on the margins of society.

"His support for local food banks and the Robes homeless night shelter project was appreciated by many people.

"He understood and supported the role our churches seek to play in being part of the glue that holds our communities together and it was always a delight to see him."