Mayor of London Boris Johnson has agreed to spend City Hall cash on a feasibility study for the creation of a new open-air swimming pool in the River Thames. 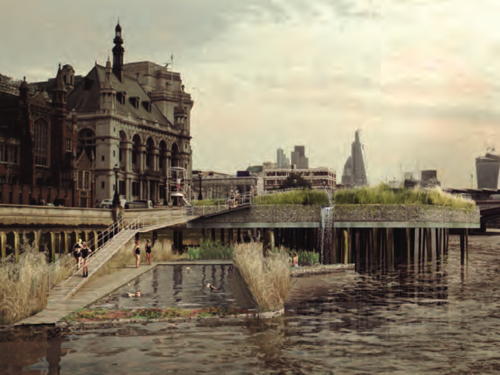 Last week Mr Johnson approved a Ł2.4 million package of cultural funding for the next two years, including Ł40,000 towards "scoping for a major new initiative on the River Thames – a London Lido".

The report signed off by the Mayor on Friday says that the Greater London Authority's culture team "will work with external partners to commission feasibility studies and commission development work for the London Lido Project which has the potential for leveraging significant funding, job creation, volunteering opportunities, and would generate significant media value".

The report does not name any locations for the proposed pool but the Mayor has long been an enthusiast for the idea.

Five years ago Mr Johnson used his speech at the annual State of London Debate to suggest a lido in the Thames at Waterloo.

Last year a consortium led by SE1-based architects Studio Octopi published its Thames Baths proposal to create a lido close to Blackfriars Bridge, taking advantage of improvements in water quality once the controversial Thames Tideway Tunnel or 'supersewer' is built.

"In the same year a floating swimming baths opened on the foreshore at Charing Cross. Heated river water was pumped around an iron and glass structure.

"Then in 1878 Agnes Beckwith 'the greatest lady swimmer in the world' safely swam 20 miles from Richmond to Westminster and back again.

"The improvements in water quality open the possibility for once again swimming in the tidal Thames.

"The Thames Baths Project looks to re-establish an intimate and playful link between Londoners and the historic lifeblood of the city, the River Thames.

"Here is an opportunity for Londoners to reclaim ownership of their largest outdoor public space."

Romer-Lee was unaware of the Mayor's London Lido proposal when contacted by the SE1 website this week.

More than a decade ago Lifschutz Davidson Sandilands and Coin Street Community Builders designed a Thames Lido for the South Bank.