Playwright Nell Dunn joined John Constable at the Boot & Flogger for the launch of his book Spark in the Dark. 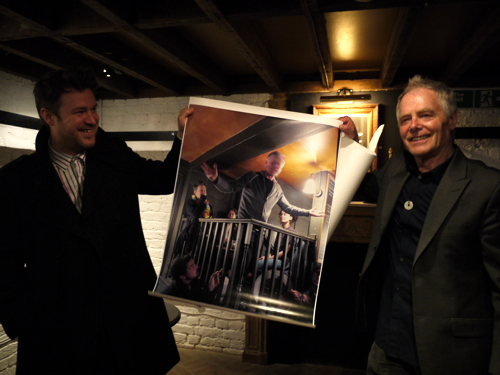 'Bard of Southwark' John Constable, speaking on Wednesday evening in the Redcross Way wine bar's cellar, said that whilst his plays had been published, as well as his epic The Southwark Mysteries and Secret Bankside, this was the first book devoted to his poetry.

"Most have never been published before," he said when discussing the poems and added that he was pleased that the publisher Thin Man Press had included his darker work.

"The Southwark Mysteries was conceived over the road at the Cross Bones Graveyard which is why it's so important we are meeting here tonight," he told guests. "It's a work that changed my life."

Nell Dunn read first from her own work Up the Junction and then The Southwark Mysteries.

Poet Niall McDevitt, who had been involved with The Southwark Mysteries, read The Human Elephant which appears in his Porterloo collection and features the Heygate Estate. He followed this by choosing The New Tory Leadership Crisis from Spark In The Dark.

John Constable chose Mrs God, inspired by his upbringing in North Wales, as one of the book's several highlights. The evening ended with him declaiming Hail The Queen of the May to mark the season.

The readings took place in front of a large version of the book cover showing John Constable with a blurred face being watched by three figures including Niall McDevitt.

John Constable is hosting Cross Bones Bards – a free evening of open-air poetry in nearby Red Cross Garden – on Thursday 29 May when the public can contribute a poem or a song. Among those appearing will be songer/songwriter Nigel of Bermondsey and poet John Smallshaw.