A Royal Navy offshore patrol vessel is moored alongside HMS Belfast during a five-day visit to London this week. 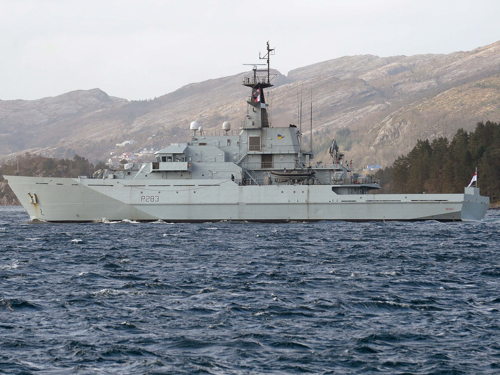 Tower Bridge lifted on Friday morning for the arrival of HMS Mersey which will remain in the Upper Pool of London until Tursday.

"This visit to London is a low key one on this occasion and a welcome break from significant periods of time spent at sea," said Lieutenant Commander David Gillett.

"Although not able to open to the public during our time in London, we will host a number of pre-arranged tours for interested groups and organisations, including Sea Cadets from around the capital."

Next week Lieutenant Commander David Gillett will pay a visit to Southwark Council's Tooley Street offices where he will be received by the deputy mayor, Cllr Neil Coyle.

HMS Mersey is one of a quartet of River class offshore patrol ships, three of which were built to safeguard the fishing stocks in the UK. The fourth is HMS Clyde and is the Falkland Islands' patrol vessel continuously based there to provide protection to South Georgia and the Falkland Islands.

HMS Mersey is one of the busiest ships in the fleet and, like her sisters HM Ships Severn and Tyne, she spends on average nine out of every 10 days of the year at sea.

Her primary role is enforcement of national and EU fisheries legislation within British Fishery Limits. HMS Mersey has also been designed to carry out a number of other tasks including – but not limited to – environmental protection, search and rescue and maritime security.

With a crew of just 42, split into three watches, the ship is able to patrol the coast for more than 300 days a year.

Tower Bridge will lift for HMS Mersey's departure at 2.55pm on Tuesday.