Plans for a new United Reformed Church building at Elephant & Castle to replace the Crossway church on the Heygate Estate have been approved by councillors. 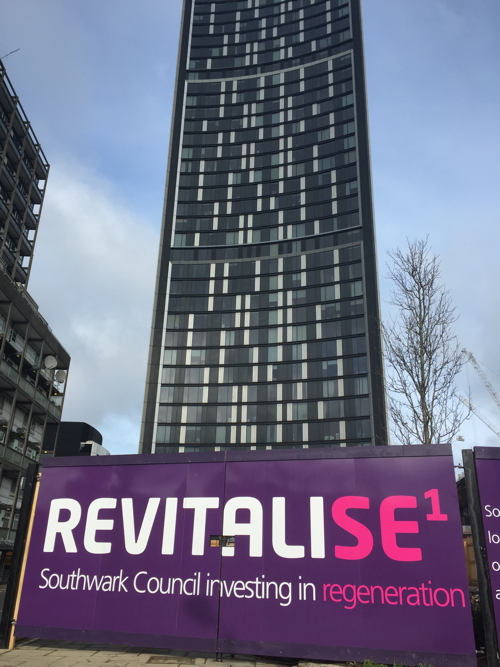 Planning officer Bridin O'Connor told Southwark's planning committee last Tuesday night that the proposed building – by van Heyningen and Haward architects – is a "well-considered design" that would make a "positive contribution" to the area.

Crossway is being displaced from its current site at the corner of New Kent Road and Rodney Place as part of the redevelopment of the Heygate Estate.

Crossway's own URC congregation is small but the building hosts worship by a range of churches from different traditions and parts of the world.

The new church will occupy the site of the recently demolished Castle Day Centre bounded to the north by the Strata SE1 tower, to the west by Wollaston Close, to the east by Eagle Yard and the south by Hampton Street.

The proposed church will have a main worship space with capacity for 250 people, as well as smaller meeting rooms and offices.

The committee heard from former Southwark councillor Graham Neale, who has lived on the Draper Estate for more than 30 years and spoke on behalf of the Draper Residents' Association.

He said that the idea that the new church and community building could be used for gatherings until 2am was "simply unreasonable" given the location next to a housing estate and called for the hours of use to be restricted to 9am to 10pm.

Mr Neale also voiced concerns about parking and asked for restrictions on the use of amplified music.

Also objecting to the planning application was Julian Fraser whose firm, Data Eliminate, operates from the railway arches alongside the proposed church.

He said that his business – which specialises in the destruction of secure data – would be "crippled" by the new development.

Mr Fraser said his main objection was to the footprint of the new building, which will occupy a larger area than the previous Castle Day Centre.

Crossway minister Revd Peter Stevenson said that Crossway has been in New Kent Road since 1904 and the church could trace its history back to the Pilgrim Fathers who sailed from Rotherhithe in the 17th century.

"Revd Kenwood, the first minister, set about making a difference to the slum areas of the Elephant & Castle, offering a range of social, physical and spiritual gifts to enhance and improve the lives of many," said Mr Stevenson.

"The church did not expect or indeed get high numbers of worshippers, but regardless they were a resource and a gift to the community."

The post-war years brought big change: "In the 1960s the dream of urban utopia resulted in them giving up their building to enable the Heygate Estate to be built."

He continued: "50 years later we are asked to move again to allow for regeneration of the area."

Mr Stevenson added: "In this past half-century the Elephant has become an international area of great diversity and many people hoping to make a fresh start. It is an aspirational place but with a degree of need.

"Crossway continues to reach out to the community, offering hospitality, love and resource.

"We know that change is difficult and we are sympathetic to those who would rather that we relocated somewhere else, but we are trying to remain in the area we have served for more than a hundred years.

"We hope to continue serving this community in innovative and sensitive ways for a hundred years more."

Architect Josh McCosh told councillors that the building had been designed to contain noise.

Newington ward councillor Eleanor Kerslake told the committee that she understood that the proposed development was linked to the wider Elephant & Castle regeneration project and recognised Mr Stevenson's hard work, but asked the committee to give "sensitive and serious consideration" to objectors' comments about noise, parking, waste management and the new building's impact on neighbouring businesses.

Cllr Kerslake explained that despite its proximity to the busy Elephant & Castle junction, the immediate vicinity of the proposed church site is remarkably quiet.