A thousand primary school pupils from Southwark and Lewisham took part in a semi-staged musical performance this week to celebrate the 600th anniversary of the Battle of Agincourt. 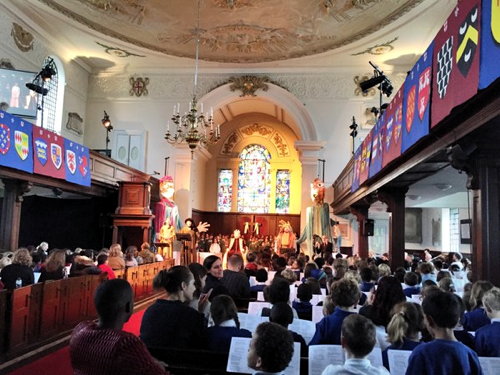 It is believed that fresh from his triumph at Agincourt, Henry V was met by local clergy on the steps of St George the Martyr in Borough High Street before making his way across London Bridge into the City.

600 years later, the battle and Henry's marriage to the daughter of the King of France were recalled in a specially commissioned new semi-staged musical performance composed and conducted by Richard Brown, former music director of the Royal Shakespeare Company.

Giants, heraldic banners, actors and a live orchestra all featured in the spectacle which was made possible by a grant from the Agincourt 600 committee.

"We are thrilled that so many local children will get this chance to work with professional actors and musicians in bringing the past to life in a place which has witnessed history for nearly 900 years," said Revd Jonathan Sedgwick, priest in charge.

"It's all part of our commitment to building community here for the 21st century."