HMS President may have to be scrapped, warn owners

HMS President - a familiar sight on the Thames near Blackfriars Bridge for more than nine decades - faces an uncertain future. 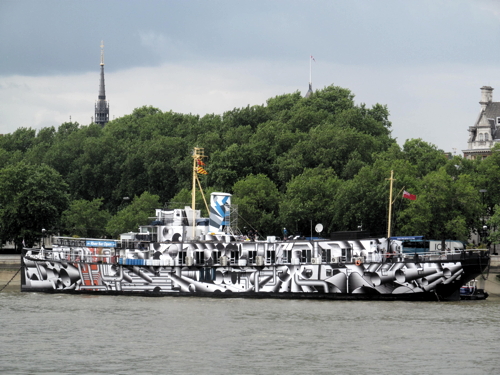 Built as HMS Saxifrage in 1918, the ship was moored on Victoria Embankment from 1922 until February this year.

Until the 1980s she was used by the Royal Naval Reserve, and since then she has had several owners and uses.

The ship left its berth earlier this year as part of preparatory works for the 'super sewer' and is currently in Chatham awaiting refurbishment.

However, efforts to secure cash from the Heritage Lottery Fund to secure the ship's future have proved unsuccessful.

HMS President Preservation Trust says that the City of London Corporation has in principle given their support to a new mooring next to London Bridge on the north bank of the River Thames.

However the charity lacks the funds to pay for the new mooring.

"Our trustees are bitterly disappointed that with all the public support we have, and after having been encouraged by a senior director of the Heritage Lottery Fund to reapply for the Ł330,000, that again we were refused support," said Gawain Cooper, chairman of the trust.

"This decision will most likely condemn the President to the scrap yard."

• Find out more about the ship and the charity at www.hmspresident.com