Tap on City Hall window and donate £3 to homelessness charities

A new contactless donation point where Londoners can give money to a coalition of charities helping the homeless in the capital this winter has been installed in the windows of City Hall. 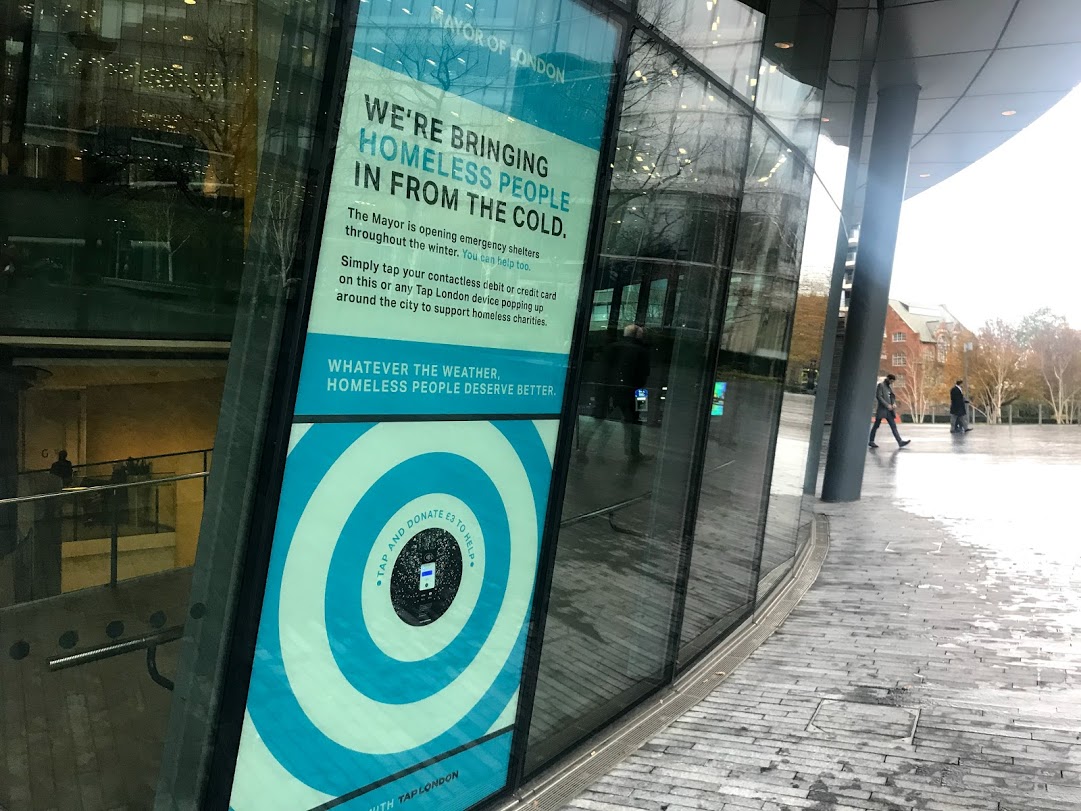 The Mayor of London has launched the initiative with the London Homeless Charities Group – a coalition of 22 charities working with homeless people across the capital. The coalition offers Londoners an easily accessible, single donation point with all donations split between the charities and going towards projects they run.

This year, donating to the charities will be even easier thanks to the installation of TAP London contactless donation points.

Supported by the Mayor, TAP London is a not-for-profit company dedicated to improving the lives of homeless Londoners through contactless technology and innovation. The TAP London points are small, secure payment points that enable Londoners to make £3 donations by card.

The Mayor launched the scheme at City Hall, where one of the building's windows now has a donation point.

Elsewhere in SE1, TAP London points can be found in Waterloo at the Draughts board game cafe, The Walrus, the Duke of Sussex, the Fire Station, the Wellington and Bar Elba.

In Union Street, donation points can be found at The Gentlemen Baristas and the London Fire Brigade headquarters.

The Mayor urged Londoners to donate to the campaign and also to use the Streetlink app and website to alert outreach services to rough sleepers needing support.

The Mayor of London, Sadiq Khan, said: "It is shameful that rough sleeping has risen so much under this Government, and it is our moral duty to do all we can to help people facing homelessness in our city. This winter, City Hall are doubling our outreach teams and making sure severe weather shelters open more often, and we want to make it as easy as possible for Londoners to play their part too.

"Last year, Londoners' generosity helped us raise nearly £200,000, and referrals to Streetlink went up by 45 per cent over the winter. These new contactless donation points will make a big difference in encouraging Londoners to do their part to help.

"Ultimately, we need the Government to wake up and stop ignoring the fact their cuts to welfare and support services are pushing more people onto the street. Along with councils and charities in London, we need sustained funding to help people off the streets, and an honest focus by Ministers on the root causes of homelessness to end rough sleeping in London for good."